I lived in London for five years, first as a student at King’s College London and then after university when I got my first “grown-up” job as a staffing coordinator at Lord’s Cricket Ground. As a 19-year-old who had grown up in a remote valley in North Yorkshire, moving to London truly was a life-changing experience. It opened my eyes to more cultures and experiences, brought me some fantastic opportunities, and introduced me to some great friends. However, it was never a place I was going to live in forever. A country girl at heart, I wasn’t interested in working for huge capitalist corporations and living the city lifestyle. By the end of my five years in London, I couldn’t wait to be out of its smoggy urban maze. Some friends suggested I hadn’t given it enough of a chance, and they were probably right, but I wouldn’t be dwelling on it once I had moved to the west coast of Canada.

When I planned some time in London during my visit home in June 2018, I vowed to go in with a more optimistic attitude. Being in London as a tourist rather than a local would allow me to see the city with new eyes and perhaps appreciate it some more. As I was staying with my best friend in Hertfordshire for a few days, we organized just one full day dedicated to London, involving some of my favourite places and minimal exposure to the crowded hot spots. The below guide is for anyone who also has a disinclination for tourist-bombarded concrete jungles, but wants to get a taste of London.

My day started with a bus from Kings Cross to Hackney. My adopted home of Victoria on Vancouver Island hasn’t yet adapted to the whole cashless card-tap thing, but I personally find this backwardness quite endearing. “Ooh, a new restaurant!” I would note along the way, or, “What happened to that shop?” We had brunch at a place called Café Miami, where a good-looking-but-he-knew-it hipster provided the least amount of welcoming customer service as possible. Nevertheless, supporting independent businesses is something I always liked to do in a city where international food chains can be found on every street corner of the central tourist traps.

After stuffing our faces with fish tacos and pancakes, we waddled down to London Fields where football (soccer) supporters were watching a World Cup match on a pub’s outdoor screen and sunbathers lounged on the sun-bleached grass. The park also has a lido (public outdoor swimming pool, for my non-British friends), but as its one of few places in London to offer clean water, prepare for it to be packed with people on hot summer days. This park leads on to Broadway Market which, in addition to its stalls selling flowers, fruit and veggies and multicultural dishes, has a lot of nice albeit pricey independent cafes and restaurants. Street markets, of which there are many spread around London, were one of my favourite things about living in this city.

We then joined Regent’s Canal. Ahh, the memories. I would often run, cycle or walk along this canal, enjoying how it wound through the city, exposing me to the various neighbourhoods of varied socioeconomic status that make up this cosmopolitan city. In some spots you get beggars or drunks, in others you get talented buskers and charming boats selling plants and books. During our walk, I was even treated to the classic experience of having my ankles snapped at by a territorial male swan. It’s like they knew I was coming back. Arriving in Angel, you have to temporarily exit the canal. Walking through this borough on a sunny summer’s day, I’ll admit that I had the thought of, “I wish I had spent more time in this part of town.” Sunshine can make anything look nice, but Angel definitely seems to have a certain class to it that doesn’t involve being shrouded in selfie-snapping tourists. Moving further along, King’s Cross has seen a lot of development in recent years, with new little walkways and green patches put in behind the station. You can’t deny that there are some very talented urban developers in this city.

Regent’s Canal runs through Camden, which is a tourist haven I can make a slight exception for, because it’s got a great vintage market, great music scene and, most importantly, a Lidl supermarket. It’s a place where on two separate occasions (once as a student, once as a graduate) I went on second dates that would eventually lead to disastrous short-term romances and consequent over-analysis on my part. But I can’t really blame Camden for that. Plus, the dates were so romantic in nature (think Cuban bars, tapas, margaritas, and live soul music) that I honestly still smile when I think about them, even though both guys turned out to be jerks.

The stretch of canal between Camden and Little Venice is a pretty spot along which my university running club would often run on Wednesday afternoons. One of the exits takes you to either the zoo (nope) or Primrose Hill which, forming part of Regent’s Park, is always a place I recommend people go to if visiting London. It offers awesome views of the city that showcase its famous old landmarks and newest architectural creations. It’s a place where you are close enough to the city to feel in it but far enough away to not feel its pollution in your lungs. It’s also a place where you can spot cute dogs and the occasional celebrity, though good luck being able to chat to any of them (the dog being my priority here).

I lived next to Regent’s Park for two years as a student (in an expensive box of a room in a courtyard where dear little boys would kick balls into our kitchen window) and it was always the place where I’d go for a run, have birthday picnics, or watch local cricket games after work. My friend and I met some work friends here for a picnic (I’ve missed Marks and Spencer’s confectionary tubs) and when they asked about my Canadian life, it certainly seemed worlds apart from my life in London. 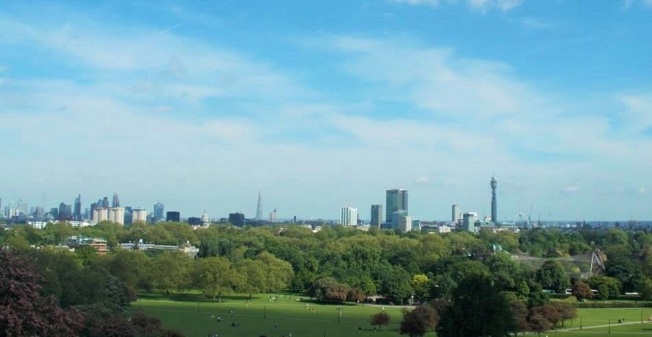 Primrose Hill in 2013 (before more skyscrapers were built)

If you’re going to be in London for just 24 hours, you should probably treat yourself to a night out. My friend and I used to subscribe to Time Out Offers through which we would get deals on theatre tickets, outdoor cinema screenings, and restaurants. One of the last places we got a discount for was a casual restaurant called Bird, on Chalk Farm Road. As the name might suggest, it specializes in chicken. And it’s really really good.

My favourite bar in London is also located in Camden. Joe’s is a 60s northern soul and rock’n’roll bar. Simple in design, its standout feature is its juke-box, which gets everybody up twisting and jiving and not caring what they look like. I confess, I didn’t actually go during this visit, but that was only because my friend and I had to catch a train back to Hitchin. Joe’s is the place where I fell for my Beautiful Heartbreaker during my first year of uni, and the place where I fell over attempting my version of a Lindy hop on my 22nd birthday after graduating. It’s a place that plays genuinely great music unlike the generic horrors in the charts today, and a place where strangers actually talk to each other.

The next evening, I caught the train into London again to catch up with some uni friends who are all nailing capital city-life, whether managing start-ups, writing for newspapers or working their way up in big law/financial firms. I can be happy for them but also happy knowing that I wouldn’t be happy doing the same thing myself. We met at the Knights Templar on Chancery Lane. (It should be mentioned that this place happens to have the grandest, largest, most beautiful public washrooms ever known to a pub-goer). Boarding the tube and quickly remembering the route I needed, I thought, “Maybe I could live in London after all.” I’d had a nice day out previously and the city seemed so familiar. Then I emerged out of Holborn station to a hostile swarm of miserable commuters on the rush home, elbowing past others and looking like they wanted to shoot themselves. Hmm, maybe not.

As much as it isn’t for me, the truth is, London is so big and diverse that you can find a neighbourhood and activities that fit your personality and interests. You just might have to spend half your monthly earnings living there, or face a minimum hour-long commute to get there (unless you are the child of a Russian oligarch or Arab oil tycoon, in which case Chelsea probably already has a bachelor pad in your name). London has an abundance of green spaces, amazing sports stadiums, a vast array of festivals and events, more bars and restaurants than you will never be able to squeeze into your lifetime, some really cool converted buildings offering some really cool shows, and it carries a lot of history (much of which, admittedly, is hard to be proud of). London also has the ability to swallow your wallet, with the option for getting around that often being to let it swallow your soul.

Looking back, there are definitely things I wish I had done more of when I lived in London, like going to the theatre, trying different bars and restaurants, and exploring more boroughs. But I know it wouldn’t have been enough to keep me there. I just tell myself that I can have these experiences as a tourist whenever I visit again. London is simply too crowded, hectic, grey, dirty and impersonal for me to want to live there permanently. So I’m happy to just enjoy it for 24 hours and then never see it again for the remaining 364 days of the year.

My latest blog post is out and I'm excited to announce that it's about my latest endeavour...I'm in the process of publishing a book 🙂
What's one place you've visited that you're sooo glad you saw when you did?
What a beautiful place to spend Easter Monday at!
When you see a particular photo, does it stir memories of a certain smell? This photo reminds me of that delightful fresh and fruity scent of grass and flowers after a rainshower 🌱
I love capturing candid moments. Here's a father and his son experiencing a moment of pure joy 👌
10 years ago today I flew off to Sydney, Australia to spend a month with family friends. Although the plane journey was the only solo part of the trip, the time away and the people I met gave me a travel bug that inspired me to take my own solo adventure. I remember a couple of weeks after getting home writing a Facebook status that said "I want to go to Canadaaa!" (back in the day of cringey Facebook statuses!)...and I did 3 months later.