As the plane began its descent, billowing clouds dispersed to reveal the sight of snow-dusted, tree-studded mountains flanking a shimmering lake. A rush of frosty air hit me as I descended the plane’s steps and walked into the airport. With no checked bags to wait for, I headed straight to the line of yellow cabs outside. Yes, cabs. No longer am I the super frugal 20-year-old student always looking for the cheapest mode of transport. There was no direct bus route from the airport, and I didn’t fancy waiting outside in this weather.

The cab driver asked what my plans were, and clearly thought I was a weird person when I told him I didn’t really have any, because he proceeded to stop talking to me.

This was my first trip to the Okanagan Valley in six years, having previously spent a week doing a Workaway exchange in a tiny town called Cawston. In bitterly cold late December, it was hard to remember how hot it can get in this region during summer. I had almost come to Kelowna in the late summer of 2017, but since it was mostly on fire, opted for the slightly less smoky Rockies instead. It was actually at the Kelowna Greyhound bus depot where my backpack went missing. But hey, that was six years ago, no grudges.

The 15k drive into downtown Kelowna saw us pass large department stores, car dealers and warehouses. I paid my $40 fare and walked up the steps to my airbnb motel apartment  – an excellent choice for a solo traveller looking for simplicity and convenience. (If you’re new to airbnb, you can get $45 in travel credit by following this link.) I dumped my things and headed out to wander through City Park, located close by. Traffic roared over the bridge that leads to West Kelowna. The beach, scattered with bathers in the scorching summer months, was now swathed in snow and there were super pretty views of the mountains across the placid lake. I walked along the lakeside passing squealing children on an ice rink, a small marina, Canada geese gathered on a hill to escape the icy waters, and a Cactus Club Cafe pumping out music while its guests celebrated Boxing Day. Near Waterfront Park, two boys with hockey sticks zoomed up and down a frozen pond against the backdrop of a residential care home. 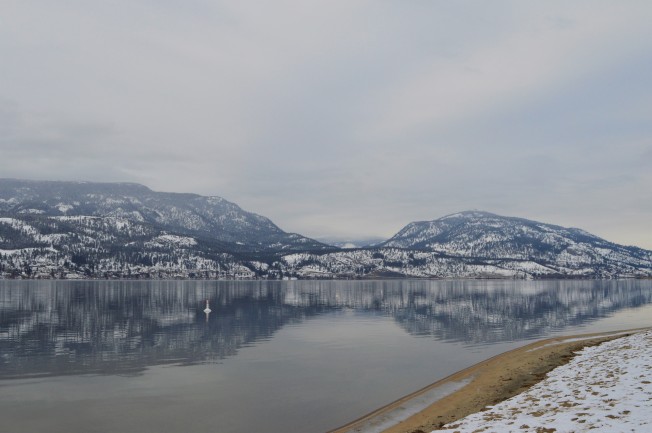 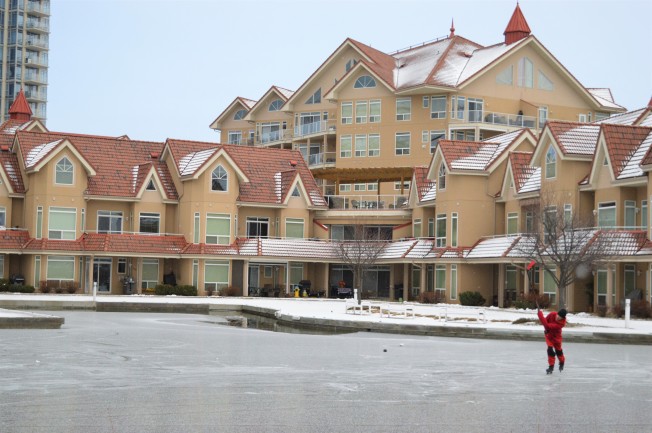 Tip number 1 when travelling to a new place it to research the nearest supermarket before arrival. Bernard Avenue had a nice array of bars, cafes, bookstores and boutiques, as well as a Safeway. By now my face had probably frozen into an awkward expression and through my jeans my legs stung with cold. Thankfully there was a Starbucks inside the Safeway, as if the store manager had anticipated the visit of naive English girls to Kelowna in the winter. Normally I’d prefer to support local independent coffee shops, but right now I was desperate for a sugary liquid to warm my insides.

Setting off back to my apartment unashamed to concede defeat to the -15 temperature, I pulled out my keys and inserted them into the lock, excited for warmth. But the door wouldn’t open. I blew on my fingers and tried again, but to no avail. At first I laughed about it, until a further five minutes of failure inspired me to ask for help.

A door two rooms down opened at my knock and out peeked a dozy looking topless guy, followed by a strong wift of weed.

“Oh, hi! I’m sorry, I was trying to -” The door shut before I had a chance to ask him for help, although that was probably for the best…

Looking around me, there seemed no other option but to ask one of the (slightly better off-looking) neighbours across the road. An elderly lady wearing bright red lipstick opened the door.

“I’m so sorry to bother you,” I began in my strongest English accent, “but I’m staying across the road and can’t seem to unlock my door.” *Rolls my eyes self-deprecatingly*

The lady “Ooohed” sympathetically and ushered me inside before calling down her husband. He followed me back to my door, asking with a Quebec accent where I was from, which inevitably led to the “long way from home” spiel I’ve heard many times the past year.

“I’m pretty sure the top one is unlocked, it’s just the bottom one that’s really stiff,” I explained.

The man took the keys from me and opened the door on the first try.

Tip number 2 (or maybe that should be 3 after “learn how to unlock a door properly”) is to make the most of good weather for hiking, even if it’s been your plan to complete a certain activity another day. I awoke the next morning to see snow falling and wind blowing the tree branches. Appropriately layered, I walked up Ellis St towards Knox Mountain…only to realize I couldn’t actually see it too well. I had a head lamp and suitable footwear, but decided a solo hike wouldn’t be a smart move if I couldn’t see the trail. I should have gone the afternoon I arrived, when skies were clearer and I’d still had a few hours of light left. Lesson learned.

Instead, I headed back south and walked down Abbott St past cozy houses and small lakeside parks towards Mission Creek Greenway, where I commenced a 6k walk on a snowy path alongside the frozen creek. It was a nice walk during which I encountered dog walkers, runners who were somehow finding traction, and elderly couples.  A pleasant oasis from the town, the greenway would make a lovely running route in the dryer months. About 3k into the walk, the views on both sides of the creek changed from residential properties to open spaces with hay barns and horses. Upon reaching Mission Creek Greenway Regional Park, I now had to find my way back to downtown. Returning the same way seemed a little pointless, but my only other choice was to walk along the fairly busy Springfield Rd. Most of this 6k walk was spent inhaling car fumes and focusing intently on the ground, because I did not want to slip on my backside in front of swarms of traffic. 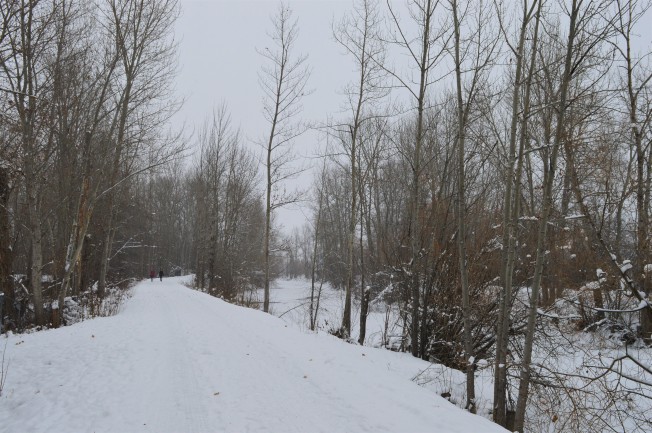 I made it back downtown with my legs exhausted from around 15k of snow-walking. As I collapsed on a bench in City Park, I was greeted by a cheery elderly couple. They jovially remarked, “Now you just need a Starbucks cup!” Indeed, that seems to be the Kelowna attitude towards winter weather: get yourself a hot drink, and get on with it. Thankfully, it only took two minutes for me to unlock my door this time.

On my third day there was a snowfall warning in effect. It looked like I wouldn’t get any of my mountain hikes in afterall. I guess I should have been a little more realistic. Still, missing a hike wouldn’t detract from the trip. Instead, I spent the day browsing art galleries, museums and cafes. Luckily for me, admission to Kelowna’s art gallery is free on Thursdays. While I’m not talented at creating them myself, paintings are something that I have recently realized I really appreciate. Based on Water St, the gallery had some lovely oil and acrylic canvases, as well as a rather dark but interesting exhibition exploring existential themes.

Outside the gallery, cars drove along the snowy roads as if there was nothing slippery on them. I spent the remainder of the afternoon reading in Pulp Fiction Coffee House on Pandosy St. Featuring a vintage bookstore and antiques section, this retro cafe played music by the likes of Johnny Cash, Jackie Wilson and Del Shannon. I resisted buying a cinnamon bun until I left. All for the good cause of supporting local, obviously…

I didn’t hike Knox Mountain and see views of Okanagan Lake from the summit; I didn’t see the trestles at Myra Canyon or witness the waterfalls at Crawford; I didn’t climb the extinct volcano of Mt. Boucherie, but I still got something out of the trip. I fulfilled my need to get off Vancouver Island for a few days and spend time alone exploring a new place at my own pace. In the age of Instagram (which I foolishly joined recently), there is so much pressure to do the BIG things and get the BEST shot. This takes the attention off simply enjoying the experience of being somewhere different. Aimless wandering is an underrated activity. Sometimes you just need to get away to clear your head. 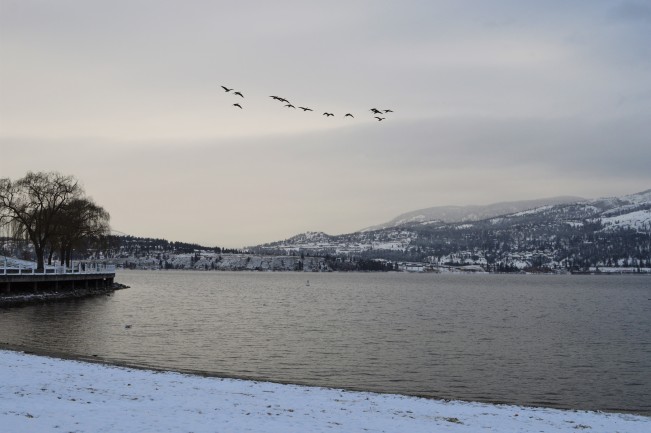 That evening should have been my final night in Kelowna, but mother nature had other plans. I arrived at the airport the next morning to discover a huge queue at security and a crowded lounge due to flight delays caused by snowy conditions. Then the cancellations began, followed by the complaints. (Canadians aren’t as polite as you think, folks.)

Sleeping in an airport against your will can make you do crazy things. For me, it was spending $200+ to book a room at a nearby hotel for the next evening. But the comfy bed and warm bath was worth it (I mean, not reeeally worth that much money, but anyway…).

I left Kelowna two days later than planned, arriving back in Victoria late on New Year’s Eve and going to bed before midnight. It’s fair to say my trip had some unexpected developments. But hey, these moments are what make our travels so memorable!

I've always wanted to go to Wimbledon to watch the tennis championships. There was a even a brief period when a young me with racquet in hand dreamed of playing on the courts! Alas, I've never made it there yet, but now a small part of me has thanks to a friend that works there who bought my book 🙂
The best places in the world are those that make you think, "Wow, our planet is incredible." Yellowstone is one of those places. When you really pause and take a moment to let yourself think about it, it's fascinating to consider how much activity is going on underneath the earth's surface without us knowing.
Ending the week on a high because my first book has been published! Trail of Worth is a memoir that covers various topics in a creative way - moving overseas, relationships, career building, solo female travel, self-esteem, and more.
Thankfully the worst of the heatwave in western Canada seems to have left us. This riverside walk through Zion's Narrows in Utah would have been a great place to cool off in those temperatures.
You don't have to be a Canadian citizen in Canada to recognize that this Canada Day isn't the same as others. It's a day of reflection and mourning as more truths about past and ongoing treatment of Indigenous communities are revealed. You can still be grateful to live in Canada while also acknowledging past and current wrongs.
The unprecedented hot weather on the west coast of Canada is making me feel like I'm in Australia. Ten years ago in March I was visiting family friends on the east coast. Even though it was autumn down there, the temperature was still high twenties. My 18-year-old self decided it would be a smart idea to go for a 6k run at midday because it would be "max tanning time" 😂. Funny how having a tan feels so important when we're younger. Fast forward to today and I've been hunkering down inside hiding my skin from the midday sun.