‘Tis the season to lose one’s clothing. Out come the bikinis and boardies, Pimms in the park and strawhats on the sand. The combination of summer heat and fewer clothes changes people. They become more cheeky and flirtatious. Van drivers whistle from their windows, runners cast sneaky glances at the others they pass, and Facebook becomes filled with bikini-selfies. Flesh makes people frisky. When it comes to actual nudity however, something happens to Brits and their flirty chat remains to be just that. In Britain, our ‘stiff upper lip’ appears to display itself at the sight of a naked body, particularly towards one whose owner isn’t exactly in their prime. Naturists tend to be mocked as tree-hugging hippies who are an embarrassment to society. By contrast, my experience of other areas of Europe so far suggests that attitudes towards nudity in these countries are a lot more relaxed. I’ll never forget kayaking past a beach in southern France during a school trip ages 13, an old man’s legs spread wide open bearing all. Rarely in Britain would you see such sights.

If you’re ever in Baden-Württemberg, Germany, make sure you spend a day bathing at Bodensee, near the Swiss border. It seems like the region’s entire 18-25 year old population descend on the town of Konstanz on a hot summer’s day. Boys jump off the bridge into the bright blue Rhine in attempts to impress the line of ladies lounging on the side of the river. Further along on the Strandbad Horn, the noise gets quieter and the people fewer. Sun-lovers sunbathe behind bushes on the edge of the lake, sometimes in the nude, or at least topless. I found myself lying metres from a tall tanned hunk with dark hair and black shorts. Jimi Hendrix played from his speakers as he read a book. I peeped sneakily from under my sunnies as he rose to his feet and dived into the water. Ahhh. 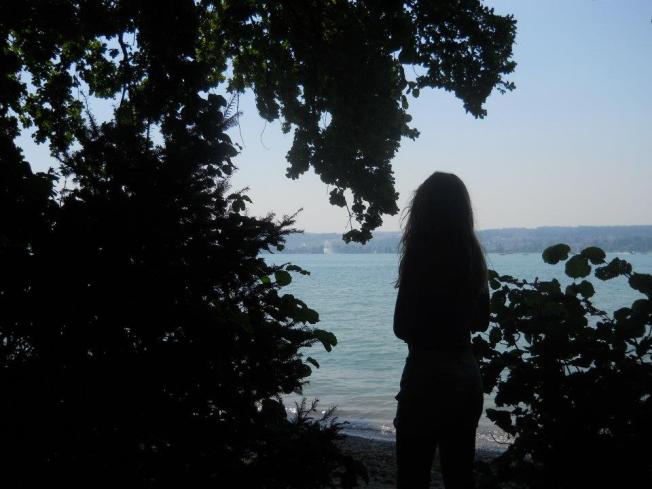 I like to think that I’ve put myself out of my comfort zone a few times whilst travelling, and that I would continue to try new things. In previous posts, I’ve been writing about how travelling alone makes you more likely to do things that you otherwise might not consider in your home country. Looking back to that day, I felt completely comfortable being surrounded by sights of nudity. The area wasn’t very open, the bushes being a useful cover. Everybody was just doing their own thing and it didn’t feel like one was being perved on (well, apart from Jimi Hendrix guy by me). Those who wanted to bathe topless could do so and not feel like all eyes were on them, and those who didn’t feel like undressing could carry on as they wished. It was difficult for me to think of places in Britain where one could sense so much tolerance towards nude bathing. Whilst I didn’t feel any inclination to be pursuing this activity myself, I thought that I was totally cool with public nudity.

Go forward a year to my trip to Iceland. Nauthólsvík Geothermal Beach was opened in Reykjavík in 2001. It’s a small and cosy haven of golden sand and warm water. You won’t get the temperatures of Bodensee, but the same sight of people bathing. Another key difference from Bodensee is that no chemical cleaners are used in the heated water, so visitors are expected to wash beforehand, naked. Ignore this expectation and you will not be too popular with the Icelanders. It’s a bit like the offence caused in Britain when a Yorkshireman moves to London – you’ll never be viewed with the same amount of respect again.

I arrived at the beach and saw a large group of people sat in the hot tub, chatting with each other. They all seemed to know one another. Suddenly, shyness enveloped me and I couldn’t walk any further. I spent five minutes waiting near the entrance as men and women – mostly 50+ looking – passed me to enter the changing rooms. I was pretending to look out into the bay, but really I was psyching myself up to shower naked in public. I imagined myself stood among old ladies in a communal shower, and I was petrified. ‘Just walk in and scout the area – the showers might not be communal, and you can always walk out,’ said a voice in my head. ‘No!’ retorted the other, ‘If you walk away, they will know you were afraid of getting naked.’

I paced from one foot to the other, weighing up the options. It wasn’t like it would have to be awkward. There needn’t be any judging. All I had to do was be naked in front of other women for about 20 seconds. I would never have to see them again. We were all in the same boat. I was 21 years old, I needed to stop being a pansy. The place was free, it wasn’t like I was paying for potential cringy-ness. Surely it would just be like the many other things I’d done after originally being nervous about them. Afterwards I would look back and laugh at my anxiety, right? Was I really going to miss out on this new opportunity just because of feeling bashful about potentially seeing an old lady’s vagina? Oh jeez. Just the thought made me shudder.

There were a few large rocks around the edge of the beach. They signaled safety, and I tactically decided to take a long walk around the perimeter towards them, my sense of relief increasing the further away from the changing rooms I went. I sat and looked back at the building. It looked so innocent and inviting, yet so sneaky and devious at the same time. The close proximity of the changing rooms to the hot tub meant that nobody would be safe from stranger’s eyes. It wasn’t like at Konstanz, where nudity could be a lot more inconspicuous.

Nearby, a few ladies swam in the bay, grimacing as the cold water first touched their skin; the price they were paying for perhaps also being reluctant to shower naked in front of others. I decided that I would rather be in the warm water, and therefore take the plunge and have that shower…But really, would I? ‘Yes! Don’t be a loser. Go get naked,’ the voice said. I hesitated again.

Suddenly, music began to play from the changing rooms. It was the Baywatch theme tune. The distinctive sound of that thumping piano brought a smile to my face as I was reminded of Wednesday sports nights in the student’s union bar – drunk rugby players pulling off their tops and waving them around wildly without a care in the world. That was the attitude I should have. I quickly made up my mind – I was going to do it, I was going to shower naked in what was potentially a public place.

I rose from my hiding place and began bounding across the sand towards the changing rooms purposefully, determination surging through my veins, arms swinging resolutely, my heart beating faster with the adrenaline. I felt good. I was ready. Bring on the nudity! As I approached the facility, I saw a few people leaving. ‘Perfect! Even fewer people to shower with,’ I thought to myself happily. Then I noticed a sign with the word ‘Closed’ on it. Oh. So that song was the cue for the lunchtime break. I’d missed my chance, just as I had finally prepared myself to get nek’ed. I looked at the changing room entrance and shrugged my shoulders in defeat. Then I breathed a sigh of relief and strode out of the exit feeling content.

Of course, looking back now I think of how silly I was to get all shy about the prospect of being naked in front of a load of random women. I had both surprised and slightly disappointed myself with my bashfulness. But nudity happens to be a particular subject that can make even the most confident-sounding people blush. Was my behaviour inspired by the British outlook towards nudity that I’ve grown up witnessing? Or are there just some things that it’s not so easy to do when you’re alone? Afterall, as stated before, familiarity is a comfort in strange situations. This scenario highlighted the potential restrictions one may experience travelling alone. But hopefully this is a lesson in how letting timidity determine your decisions will only lead to regret. I would like to put my hands up and say that one day, I hope to visit a beach like this one and shower naked with lots of ladies.

2 thoughts on “Nudity and the Solo Traveller”

Such bizarre weather on southern Vancouver Island at the moment. One minute it's windy and I wonder if I will be warm enough on the walk to work, then the sun comes out and I regret wearing a jacket, then the clouds darken and I'm relieved I brought my umbrella 🤷
Happy Sunday, folks!
Waiting with excitement for my manuscript to come back with the copy edits...
In a year that's seen dramatic reductions in both international and domestic travel, one positive impact has been clear: our planet's chance to breathe.
Looking out for summer 🌿
My latest blog post is out and I'm excited to announce that it's about my latest endeavour...I'm in the process of publishing a book 🙂