You’re in your home country at a bus stop or in a lift or some other enclosed space, joined only by an older stranger. The stranger begins speaking to you and so you engage in polite small talk to fill the time, almost because it feels necessary in order to avoid an awkward silence. Then you part ways and forget about the other person. A few days later, you see them again in a more public context, but they are not looking to be busy themselves. They don’t notice you and you have no reason to speak to them. What would you do – walk right past them whilst looking in the opposite direction, or go up to speak to them, regardless of hardly knowing them?

It is hard to believe that one would feel any desire to approach them. The social-networking generation seems almost too afraid of the potential gawkiness of human interaction to strike up conversation with a random person they share no established connection with. Familiarity is a comfort. When someone is certain of their position in their nearby surroundings, they are less likely to feel the need to communicate with a vaguely familiar human being. If you go on a solo trip to a foreign-speaking country, you might find yourself amazed at how easily the rules of the equation can change.

Day One in the Black Forest, Germany. I had spent the night in a youth hostel in Freudenstadt, a market town in the north of the area. Before a day of hiking commenced, I dropped into the tourist office to quickly find inspiration for a route. Walking out of the door whilst running the directions through my mind, I almost bumped into a man chaining up his bike. “Hey there!” he said cheerily in an accent I instantly recognised as Canadian. “You’re staying up at the youth hostel, aren’t you?” I was taken aback by his genial approach and replied with a hint of uncertainty, wondering how he knew. “I cycled past you on the way here – I’m at a guesthouse in town,” he added, as if noticing a look on my face. He looked to be in his early forties, but despite his older age I still found his confident chattiness quite surprising.

It seemed only polite to ask a short question or two.  After sharing his plan for the day, the man remarked, “You’ve picked a great day for a hike,” nodding up at the blue sky. This seemed like an appropriate time to move on, so I wished him a good trip and we parted ways. I promptly returned to recalling the name of the path I was looking for, and my brief encounter with the man was forgotten in favour of sign posts and sweet little streams. 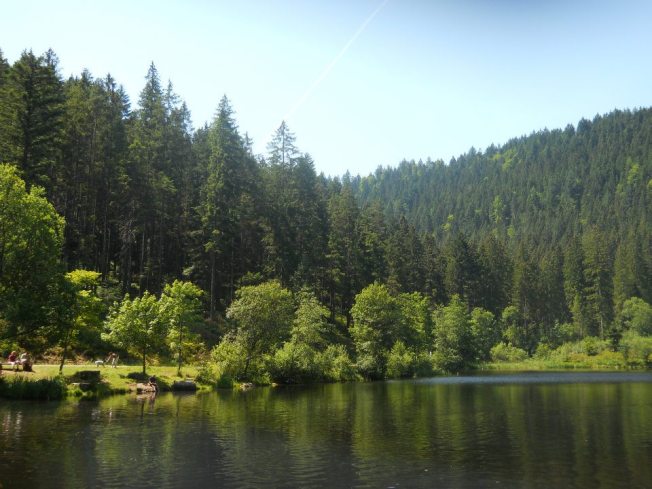 A few days of moving southwards later, I ended up in Freiburg im Breisgau, where I would spend a few hours of the morning before heading back to Heidelberg. The town is famed for its Minster and for being Germany’s sunniest city. Sunlight wasn’t out on show today though. Thick clouds created a sense of lethargy as I dawdled through the large hoard of tourists and students in the university town. It was market day and I squeezed and side-stepped past people looking at various cheeses and vegetables and wines, feeling like a mouse amongst the mania. Elbows knocked me and I looked around dazed as the air was filled with rapid German chatter. The past few days had been filled with walking and my legs felt sluggish. The weather and the people were draining, and I suddenly felt a little overwhelmed by my surroundings. I needed to stop and recover for a minute.

An ice cream sign called me over. One scoop of mint choc chip – heck, why not two? I walked on past a row of picnic benches filled with tourists gorging on bratwurst and burgers. Suddenly, one of the munching men caught my eye. I realised it was the Canadian man I’d seen a few days earlier.

Without thinking twice, I bounded over to say hello, feeling a wave of respite from the mass of unfamiliar people. Caught unaware, the man looked up mid-ketchup-spurting-bite with wide eyes of surprised embarrassment. He’d see me standing in front of him holding an ice cream in my hand with a big grin on my face, like a little kid. We both laughed at how silly we looked. After a proper greeting, the man asked if I’d like to join him for a drink at a nearby beer garden that served only Swabian speciality beers. I said yes without hesitation.

My initial dubious impression of the man had completely vanished. In the last three days I had only uttered about 50 words. I was craving some human contact through which I would be able to have a fluid conversation in my own language for a few minutes. Having felt lost in and exhausted by the busy state of the town, the man’s familiar face provided an element of reassurance. So I went ahead and did something that would have probably been classed as ‘breaking a rule’ back home – going to have a drink with a male I hardly knew, and a much older male at that. But the man’s age wasn’t on my mind at all as we found a table on an upstairs terrace and chatted about Canada. He said I seemed to know the western side of the country better than him. His name was Kevin and he worked in the civil service, but loved cycling in his free time.

As he ordered and paid for our drinks, attempting some basic German with our waitress, I realised that Kevin was a genuinely good-natured person. I told him about my degree and my hobbies, and that I would be volunteering at the Olympics when I returned. With a big smile he said, “Well it seems like you have a lot going for you, Shannon.” Those words have stuck with me since.

Once we had finished our beers (I tactically ordered a half-pint so he wouldn’t have to wait for me), we headed back downstairs into the street. I felt rejuvenated, my batteries recharged. Kevin planned to spend a few more hours in Freiburg, while I needed to head back to the station. After a quick hug goodbye, we parted ways for the second and final time. There would be no sharing of contact details to keep in touch, as is so often the trend amongst young travellers who have spent a few drunken hours together. It was just simply an hour of shared company that made the day a little more interesting for both.

I’ll likely never see that man again, and so he will never know how valuable I found his company for that short time (unless, of course, he finds this blog!) I had never felt so glad to see such a familiar face whose owner I was so unfamiliar with.

My dad told me two things before I travelled solo for the first time: 1) that travelling alone makes one more open to new people and new experiences, and 2) that it makes one realise that people are nice. After that morning in Freiburg, I realised that I had underestimated the applicability of his statement. It’s something that is not just relevant to people you meet in bars or on a tour, someone sat next to you on the bus or sleeping in your dorm; it can also be relevant to random situations where there is no expectation of speech and interaction. If someone is alone abroad, they are likely to feel more receptive to the company of an unfamiliar person, if that person seems more familiar than the alternatives. And yet, if they were in their home country, they might not even consider approaching a stranger.

I now have a better understanding of why people in a foreign country sometimes crave contact with someone that speaks their language. It can be a form of comfort – a reassurance when one is feeling insecure in or disillusioned by their unfamiliar surroundings. There is no shame in craving some ‘home-away-from-home’ moments – everyone is bound to experience that need at some point whilst travelling alone.

The rare coincidence of seeing someone again in a foreign land made it seem silly for me to avoid approaching the Canadian man. It seemed like one of those moments that happened for a reason, to not only boost my morale but teach me a life lesson.

So if you’re overseas and an older stranger starts talking to you enthusiastically, go with your gut of course, but try not to make assumptions about their intentions and subsequently dismiss them off the bat. A few days later, you might appreciate their bold and unconditional friendliness.

One thought on “Familiar Faces in Foreign Places”