The noble faces of ancient towering cliffs gaze down with dignity over a desert kingdom of cottonwood trees, sandstone boulders and winding rivers where 12,000 years ago, mammoths and sloths would roam and pioneers would admire a land deemed “too stunning for mere mortals.” This was a destination to behold, a place of refuge for angels and saints who deserved to live on forever in this prestigious realm.

Your own eyes will tell you that Zion National Park is an example of the extraordinary, especially when it comes to hiking opportunities. Of the many routes available, there are two which stand out as unique in allowing visitors to immerse themselves in the natural environment and experience its mystical vibes. One takes you deep into a canyon in which you are enclosed by huge sheets of rock; another takes you high up a cliff where you are exposed to the wider world. The first national park to be established in the geological heaven of Utah, Zion is a blessed part of the world for hiking lovers who aren’t afraid of water and heights! 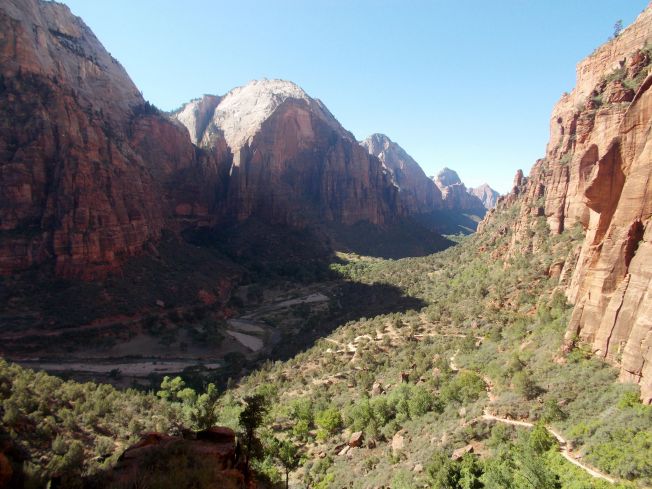 Zion comes across as one of the more “untouched” national parks and one of the great things about it is its free shuttle bus system which prohibits cars from travelling on the Scenic Drive from spring to autumn, hence preventing congestion and promoting a cleaner environment. Grazing deer blend in against the creamy cliffs as the bus winds its way gently through the canyon, passing sacred natural landmarks such as the Three Patriarchs. Hop off at the final stop of Temple of Sinawava and let the adventure into the Narrows begin!

The easy 1-mile Riverside Walk will lead you to the river’s edge where the wading commences. At first it feels bizarre to be walking through water with shoes on, but you’ll soon get used to the temperature and texture as you make your way further down the gorge. It’s essential to wear sturdy shoes on this walk. Many walkers use sticks to help them navigate over the rocky river floor, but I preferred to test my natural balance, precarious as this was at first. I gradually gained more faith in my feet and was able to traverse the uneven ground without looking down so often. The miracle of walking on water came to mind…although I didn’t quite get that far! Parents would tow their little ones along in blow-up dinghies. I left my muddy hand print on the glistening wet walls decorated by visitors thousands of years after the first settlers made their mark. 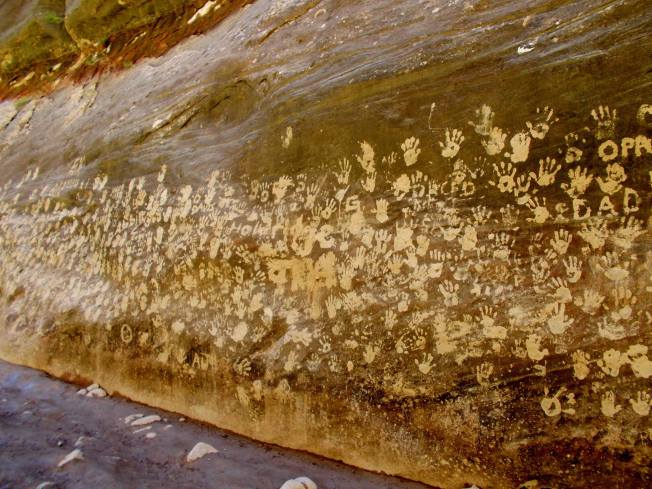 Stains of iron oxide on the canyon walls form varied patterns throughout the route, almost looking like they have been painted by former inhabitants of the land. When you reach the Narrows half a mile into the walk, this is where you really don’t want a flash flood to start! As the canyon walls begin to close in, the air turns colder and echoes grow louder. The atmosphere becomes slightly eerie, as if you are in the presence of ghosts whispering your name as you enter their domain. Perhaps it is their chiselled faces that jut out into your path. 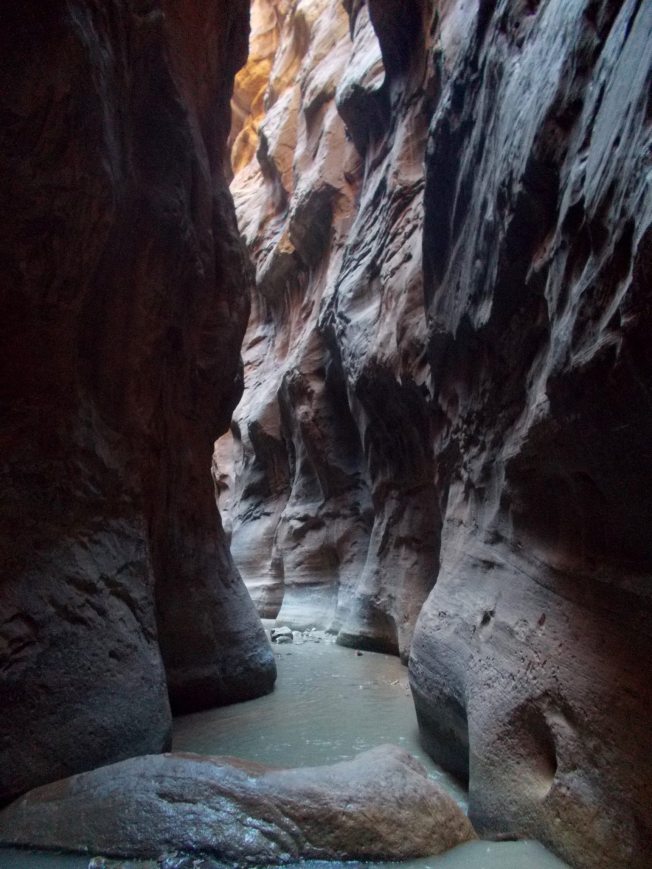 There are points when you might be waist deep in the water, so it’s advisable not to bring valuables with you on this walk. Do bear in mind however that you may be chilly after leaving the water. Nevertheless make the most of the water on your skin as the park only receives 15 cm of rainfall a year!

This striking monolith gained its title in 1916 after the explorer Frederick Fisher claimed that”only an angel could land on it”.

Starting from the Grotto shuttle stop on the Scenic Drive, the West Rim Trail up to the monolith is a 2 mile thigh-burning, zig-zagging route that hugs mountains of bronzed sandstone. Lizards dart between cracks in the rock only to become camouflaged against the dried leaves. A plentiful supply of sunscreen and water is essential! After a mile you’ll find shade in Refridgerator Canyon before you have to “squiggle the wiggles” and tackle a series of steep switchbacks. My partner and I foolishly decided it would be a good idea to start running up the first one, without realising how many were left… 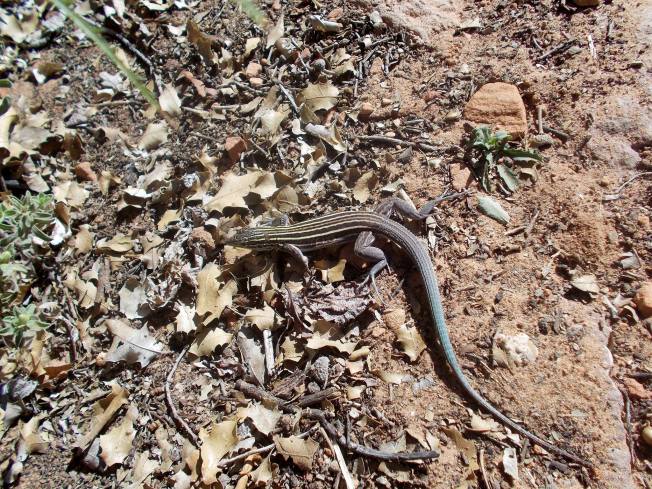 Many gasps for air and gulps of water later, you’ll reach the flat sandy area of Scout Lookout where you’ll see the ridged runway for Angel’s Landing begin ahead of you. Some people won’t even make it onto the trail because they are so fatigued after their sweaty uphill trek. From the start of the trail to the end point is only half a mile, but the path is steep, complex and takes time to maneuver. But for those who get a thrill from challenging routes, it’s great fun! 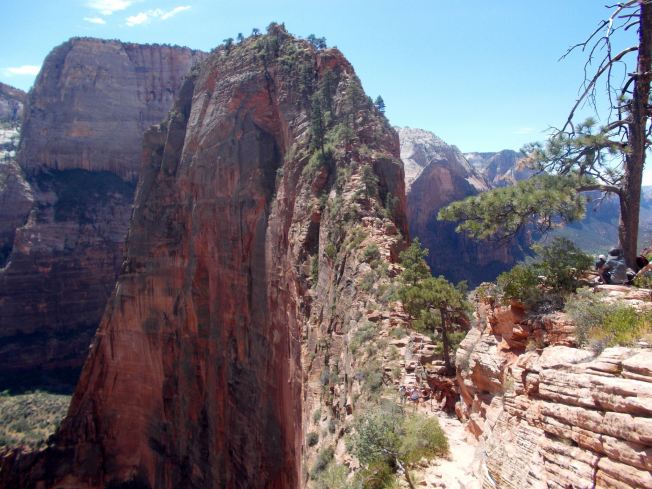 At the time we did the hike (in August 2014), six people had died within the last 10 years on this trail. In a way this doesn’t seem like much when you consider the height and width of this monolith combined with the threat of heatstroke causing hikers to keel over. This hike is not for the faint-hearted. At times you will be walking along a very narrow path with a stomach-churning drop of over 1000 feet off the side, the Virgin River looking only a millimetre wide far below. Chains regularly have to be used to ascend steep slabs of rock and there are narrow crevices which you must hoist yourself up through. One of my strongest memories is the sight and smell of sweat-stained shorts as a (rather large) man’s buttocks loomed alarmingly close to my face while he struggled to squeeze through one of the thin gaps in front of me. I would not be offering to give him a push… 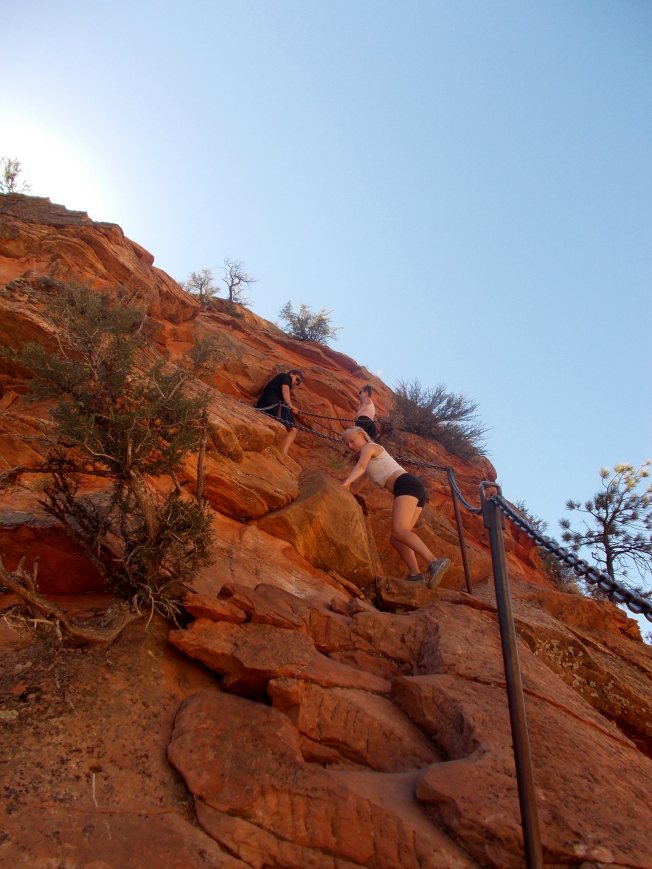 Courtesy is definitely a requirement on this hike, as many times there will be not space for more than one person to pass through a certain part of the route. Those heading back from the end would offer support to approaching hikers with calls of “Not far to go!” We finally reached the summit with stunning views of the valley of Zion sprawled out before our eyes. We, the angels, had landed and it was easily one of my most fulfilling travel moments. Man-made rock piles stand proud near the cliff edge, showcasing the hiker’s achievement to the world in front. It may not have involved the elevation of Everest, but this hike had brought its own unique challenges. Gazing out at the view ahead, you can’t help but feel superhuman after this remarkable feat. 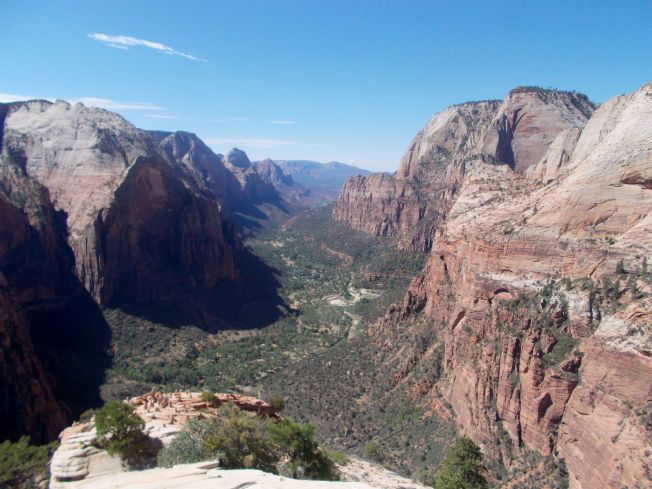 I saw the large man produce his camera to take a photo as proof of his achievement. Whilst reaching the summit of a hike alone is very rewarding, I was grateful to be able to experience the physical and at times mental challenges of this hike with someone else, and share the subsequent sense of success. I now wish I had offered to take the man’s photo so that he is able to look back in later years at himself against this incredible backdrop and feel a great sense of pride. I did however compensate by asking a German couple if they’d like their photo taken. I particularly loved how much they appreciated me speaking their language.

It would be easy to get slightly complacent about safety on your way back along the ridge, but in your rush to finish the hike after having seen the best bit, it’s important to remain cautious and take your time. On the way back down the West Rim Trail we passed many tourists panting as they hiked up towards the monolith under the sweltering heat of the midday sun. It was definitely a good idea to set off on this hike early, to avoid both the peak sunshine and the greater numbers on the trail. When you’re back on ground level, dive into the Virgin River to cool off. You won’t even care that you’re not wearing swimsuits as your body will be so grateful for the refreshing water! It was here that we chatted with a family on vacation from Minnesota, and I began to understand better why some Americans might be so ignorant about other areas of the world, because they have so many amazing places to discover within their own huge country.

With the amount of calories that you’ll burn off completing this tough 5-mile hike, you’re bound to feel hungry later. We drove into the village of Springdale to fill up on gas and my partner asked inside for a recommendation for lunch. We were advised to visit a Mexican restaurant around the corner called Oscar’s Cafe…and it was an excellent recommendation. This was an occasion where American food portions no longer seemed outrageous. Served by a friendly waitress, we shared a scrumptious meal of fish tacos, beef burgers and sweet potato fries. Then came dessert. We dived into the mountain of ice cream-smothered chocolate brownie devilishly, only to be distracted by the sound of a young girl on another table exclaiming to her red-faced mother: “They’re gonna get fat!” My partner conceded defeat after a few mouthfuls, but the pudding-lover in me ploughed on until the end before I sank into a food coma all afternoon.

If you love the idea of pushing your boundaries to out-of-this-world levels, definitely visit Zion National Park and chase the Angel. If you’ve been to Zion before or have any questions, please comment below!

More information on the Angel’s Landing trail can be found here.

If walking to the Narrows, be sure to check forecasts for flash flooding beforehand.