I recently read Into the Wild, the journalistic book by Jon Krakauer that discusses the life of Chris McCandless and his motivation to venture alone into the Alaskan interior with minimal supplies. After McCandless’s decomposed body was discovered in September 1992, some people labelled the 24-year-old American as an arrogant fool who should have been better prepared for the harsh conditions he would face; Krakauer attempts to explain the reasons McCandless chose to live off the land with little help. He defends the young man’s intentions but acknowledges his mistakes, stating that ultimately it was ignorance, not arrogance, that led to his death.

Reading this book made me think of people I’ve encountered while travelling who have also been inadequately prepared for their undertakings. I can put my hands up and say that, at the age of 19 on my first solo trip, I was one of them as I wore shorts whilst hiking up Whistler Mountain in the Canadian Rockies with its elevation of 2181 metres. Standing level with the clouds, a mid-40s hiker in appropriate gear asked if I was cold, and I knew even as I indignantly shook my head with shivering knees that I should have been more sensible. I wouldn’t make the same mistake again.

However it still shocks me when I see people older than me dressed inappropriately for certain activities and weathers, or attempting feats that are clearly far beyond their fitness level. The single biggest eye-opener was on the island of Kauai in Hawaii, when I and some friends hiked to Hanakapiai Falls in the Nā Pali Coast State Park. You may be thinking how this is a location far different to that of Alaska, but a large difference in temperature doesn’t mean this popular holiday destination is any less dangerous. In fact, the 11-mile trail that encompasses the particular hike I did is regarded as being in the top 10 of America’s most dangerous hikes.

The first two miles of the Kalalau trail along the Nā Pali Coast end at a river that flows into the ocean. As roaring waves thrashed against rocks, I was told by friends native to Kauai that this beach is renowned for the number of drownings that occur as visitors innocently go to the water’s edge, only to be smothered by a wave and swept away by the force of an overwhelming current. Across the river, a trail continues on for two further miles into the Hanakapiai Valley of mud, bamboo trees and rocky river crossings until it comes to the  91 metre-high waterfall where signs warn of falling rocks from the high cliff. If one gets in danger here, there is no mobile signal to call for help.

We set off on the trail at 7 a.m to avoid the tourist trap. Even at this time, the path was muddy and slippery. The rocks over the river glistened with slime. I like to think of myself as quite an experienced hiker – distance and elevation aren’t too big a deal for me – but this trail was definitely one of the most challenging ones I’ve done due to the natural elements it contained. (If you’re not convinced of this by the photos, that’s because my camera was tucked securely in my backpack during these tricky moments!) 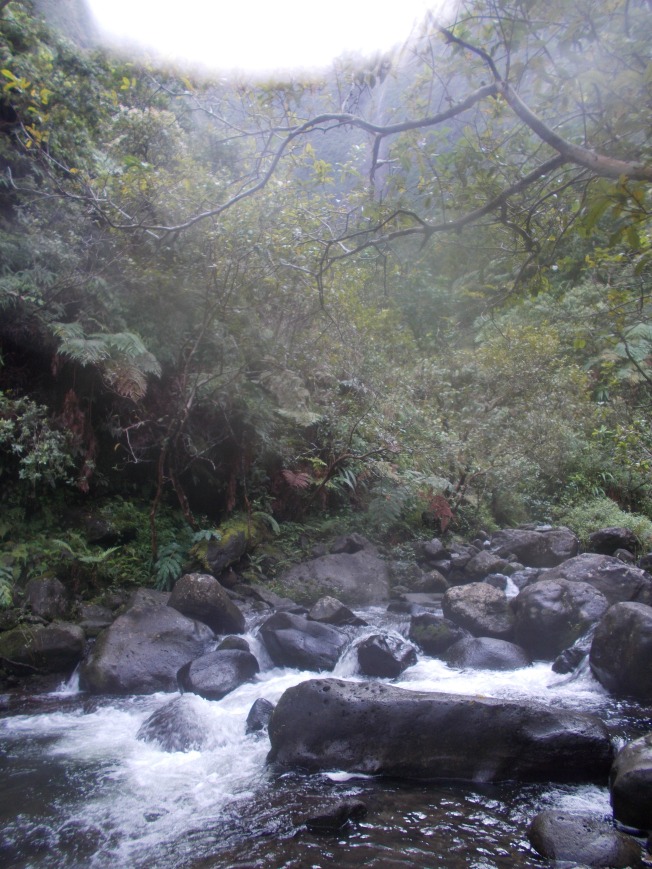 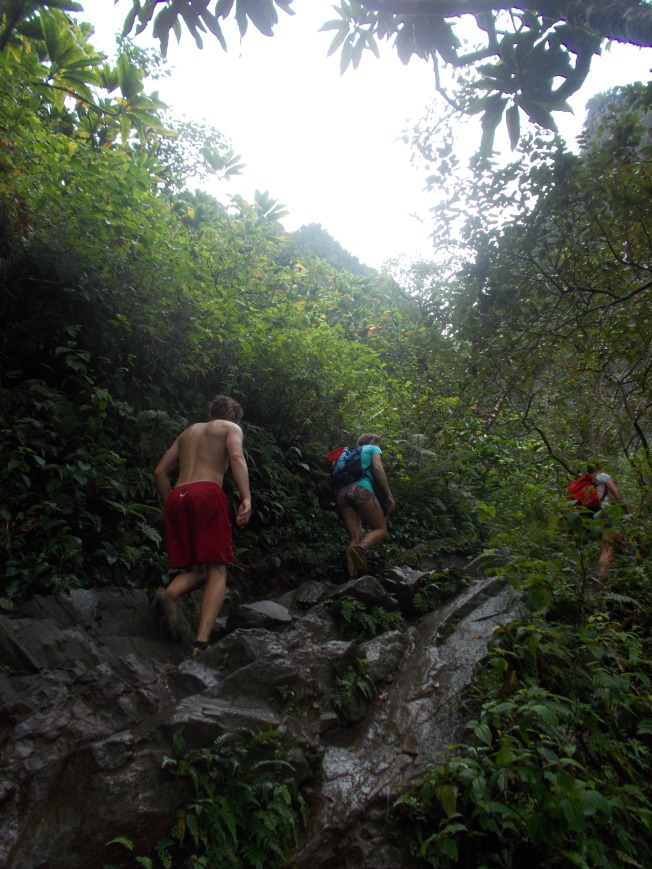 Around midday on the way back we reached Hanakapiai river marking two miles left to go. By now the numbers on the trail had vamped up immensely and people were queuing to cross the river. The sights I saw here and on the last two miles were quite unsettling. I watched with my heart in my mouth as people carrying backpacks far too heavy to support their balance gingerly attempted to cross the river on the slippery rocks. I saw elderly people who could barely walk unaided attempting to climb steps smothered in greasy mud that concealed uneven tree roots. I encountered guys and girls warily descending steep paths drizzled with mud and scarred with skid-marks whilst wearing flimsy flip flops and brand new Nike Airs probably unwrapped from under the Christmas tree a few days earlier. Even at the most challenging times, hiking should be enjoyable. Very few of the inappropriately dressed people I saw looked like they were enjoying themselves. 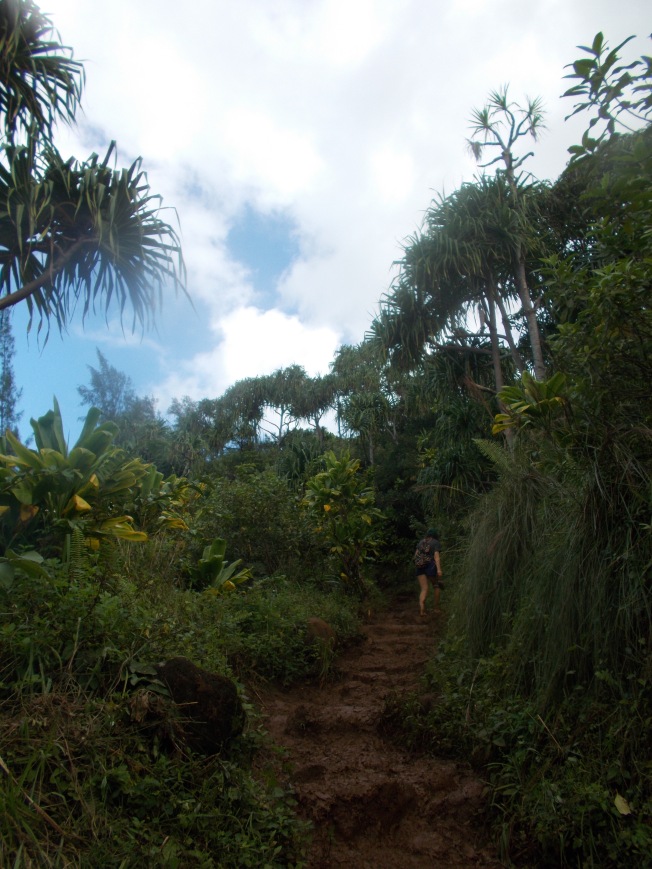 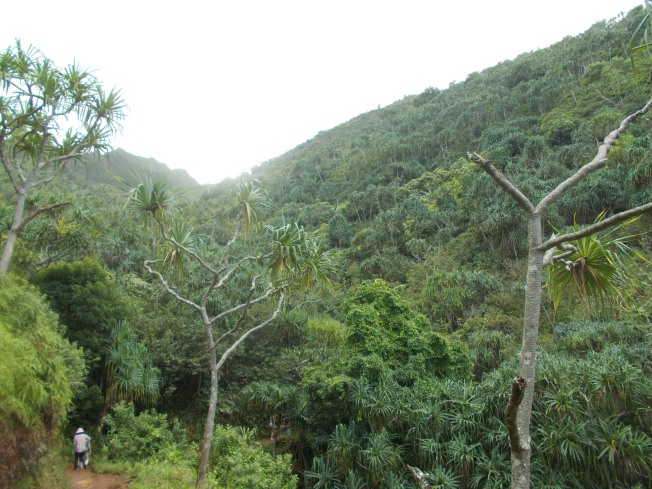 Travel has become much more accessible thanks to the likes of of travel blogs and social media. Blogs tell us that “anyone can travel”, encouraging people to quit their day jobs for a life on the road. I think it’s excellent that more people are travelling, and it’s something I hope I myself can inspire in people who read my blog. Social media platforms such as Instagram enable travellers to give others instant access to their experiences. There are benefits to this; in particular, it lets friends and family at home know the traveller is safe. Ironically however, this promotion of travel-for-all and availability of instant access could also be creating a cult of irresponsible travel. In a world where ‘likes’ and retweets are perceived to be indicative of popularity and hence success, some people forget to prepare properly and take precaution when it comes to aspects of travel such as hiking.

I will happily be the first to acknowledge that I tend to upload a lot of travel photos onto Facebook and my blog. However this is done days, sometimes weeks after the photo has been taken and not as I am having the experience. This not only allows the traveller to make the most of the moment without staring at a screen, but can prevent them taking risks in the hopes of receiving a quick ‘like’ for their pretty selfie in front of a backdrop illustrating a daring adventure. Getting excited or feeling proud about one’s undertaking can cause an impulse to share the moment with the world, leading to spontaneous irrational choices. Posing with a selfie-stick on a narrow cliff edge in windy weather before a beautiful ocean view? Walking down a slippery and uneven rocky path towards a tranquil lake whilst staring at your phone choosing a flattering filter? Not a smart idea.

Any travel blogger who says they don’t want to impress people with their photos and stories is lying. What I and many travel bloggers can confidently say is that I am not wanting to impress with how I look in a photo, but with the scenery I am looking at. Social media tends to take the attention off the environment and onto how people look in the environment. This is turn puts a pressure on some people (mostly young girls) to look their best. Perceptions of what “looking your best” means on Instagram might not necessarily equate to suitable hiking attire.

Ultimately it’s up to people what they wear when hiking, but they must accept that they are responsible for their own welfare, and their choices will govern how easily and successfully they can do something. In some cases, one’s actions and choices can be selfish if, by putting themselves at risk through lack of preparation, they also put others near them at risk should they be needed to help them. Nobody should feel like they can’t travel, but everybody should know their limits.

In their attempts to promote a destination and perhaps receive a cheque or free perk in return, travel bloggers must be careful not to create unrealistic expectations of what one can do in an area. In glorifying locations as exotic paradises, they must remind readers of the fundamental practicalities of hiking, swimming and other general activities. Before starting a trail, people should have the right footwear; they should check weather forecasts; they should pack sensibly but lightly; they should know details about the trail; and they should be alert and aware of others whilst on the trail. Hawaii may be a heavenly escape of stunning beaches, palm trees, chilled music and luscious cocktails, but it also has the potential to bring hell on one’s trip if they do not prepare properly.

Tips for this hike can be found on this website

One thought on “Likes vs Lives: Hiking in Hawaii”