Located off Highway 1 just under 20km from Victoria on Vancouver Island, Goldstream Provincial Park is a great stop en route to Tofino and a favoured destination among locals looking for a weekend walk with their dog. Parking is free, toilets are on site, and the staff in the tiny visitor centre will point out the park’s key areas on a map.

Autumn is a lovely time to visit this park as the maple leaves have a wonderful golden glow to them when they catch the sunlight, emitting that wispy wet sound as you wander through them. I spent much time staring at the ground looking for the perfect one to take away with me. Within these lush surroundings, the only fault is the faint sound of traffic from the highway nearby.

As you walk through the tunnel that remains fom the gold rush experienced here in the mid 19th century, you’ll come to Niagara Falls (a much smaller version of its eastern twin!) with a trail beginning on the right. There aren’t many signs so further on you have to follow the sight of flattened soil which highlights a path up to the right. Scramble steeply up and after leaping a few fallen logs, you’ll eventually reach the old railway trestle which, based on the number of Facebook cover photos I’ve seen that feature them, is quite a popular place with island kids. 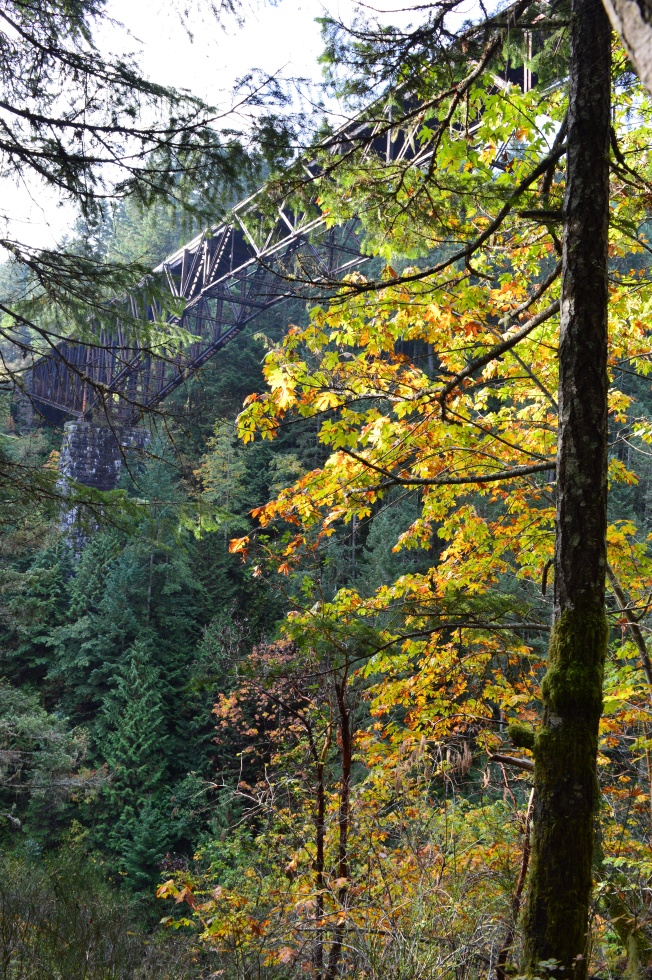 The park is most famous for its salmon run which takes place in mid October until December, featuring mainly Chum salmon as well as Coho and Chinook. I saw about 12 salmon struggle upstream to lay their eggs having journeyed from the Pacific Ocean after living there for the past three years. Conquering the current is quite a battle, with splashes erupting sporadically as the fish thrash to move upwards. Nests in the gravel are known as ‘redds’ and are chosen by the female, while the male guards the area. Her eggs, known as ‘roe’ are fertilised by the male after they have been laid. After a new life has been created through all this effort, the salmon will slowly die in the place where they were born. It’s quite the sacrifice! To add salt to the wound (or perhaps highlight the significant existence of the food chain in nature), bald eagles will eagerly feed on their corpses in the spring.

Some visitors will come to the park for a 60 minute refreshing walk; others will spend a day exploring. I did the former but elsewhere in the 366 hectare park you can find a range of rich vegetation including red cedar and arbutus trees, while if you crave a workout there’s the hike up 419m high Mt. Finlayson.

When surrounded by such an abundance of natural goodness, it’s a shame that some visitors couldn’t put their Starbucks cups in the many bins provided in the park. But this is the risk when nature is easily accessible to urban society and the social habits that form within. The park is in close proximity to life in the fast lane, but as photos like this one below show, it’s a great little spot for when you need a breath of fresh air.