Arches National Park is located just outside Moab in Utah, USA. For a state that has such strong religious communities, it seems ironic that it is also home to many national parks that stun visitors with their complex geological formations. Whether a higher power made them or not, the sights in Arches are magnificent enough to make you bow your head in respect. Covering all the areas and 2000 recorded arches in this 76,519 acre park would make an even longer post than my usual ones (‘is that even possible?’ I hear you say) so below are some highlights from the sections I visited during my afternoon in Arches.

A winding uphill entrance leads you into the park, which was originally classed as a National Monument in 1929 before being upgraded to national park status in 1971. In the ‘Windows Section’, Balanced Rock stands out like a defiant fist punching for freedom amidst gloomy clouds. A random collection of fins in the distance is common as you drive on, quickly losing the desire to take photos in favour of just absorbing what you are seeing. 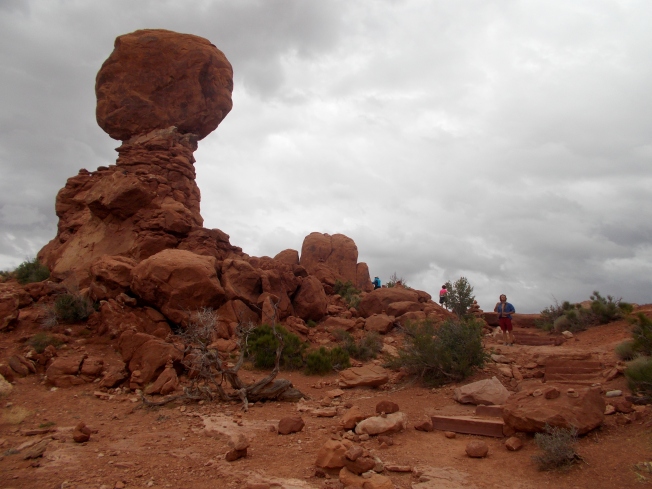 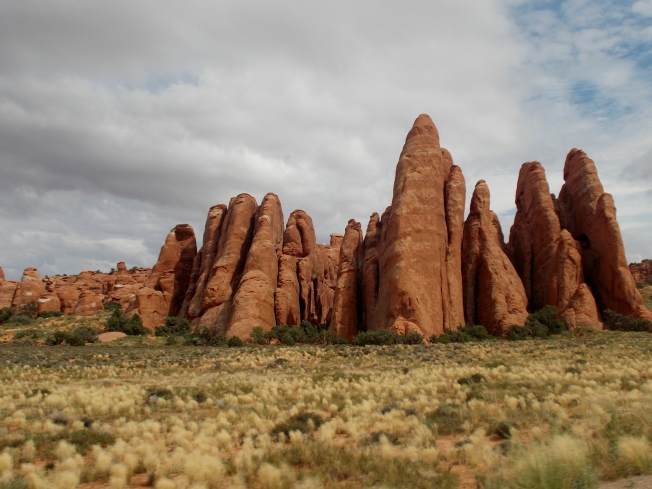 The Cove of Caves looks like it would have been a suitable ‘home’ area for the humans who occupied this park 10,000 years ago. As you drive on through the park, it’s fascinating to consider how long these fragile looking structures have stood. 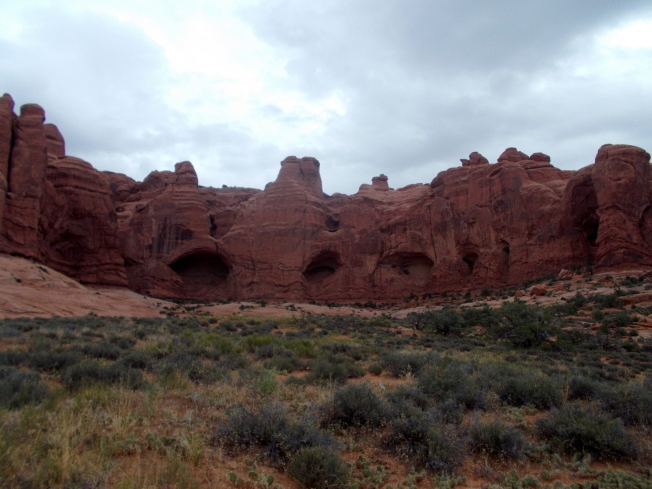 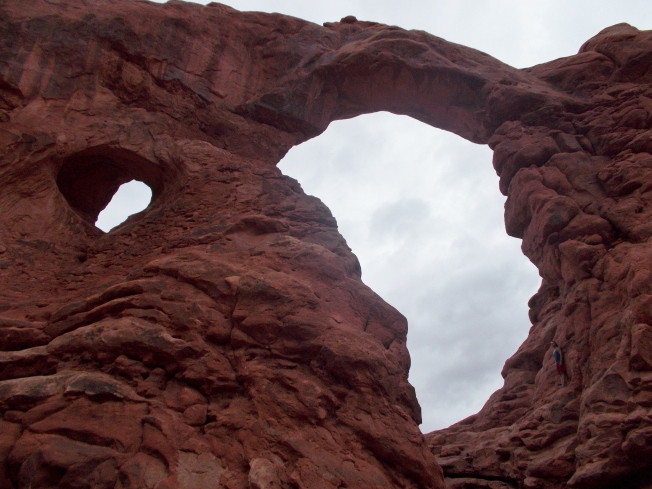 Driving on further, Delicate Arch is the most photographed in the whole park, as you can see by the dots of people surrounding it. Its name perhaps comes from its rather delicate-looking placement down the side of a slope. The weather wasn’t too cheerful and having to compete with fellow tourists for a photo is never fun, so it was skipped.

Upon arrival in the Devils Garden section in the north of the park, the sun decided to come out. First up was Tunnel arch, with the hole’s shape so seemingly symmetrical that it’s easy to imagine someone coming out at night to sand down its edges. 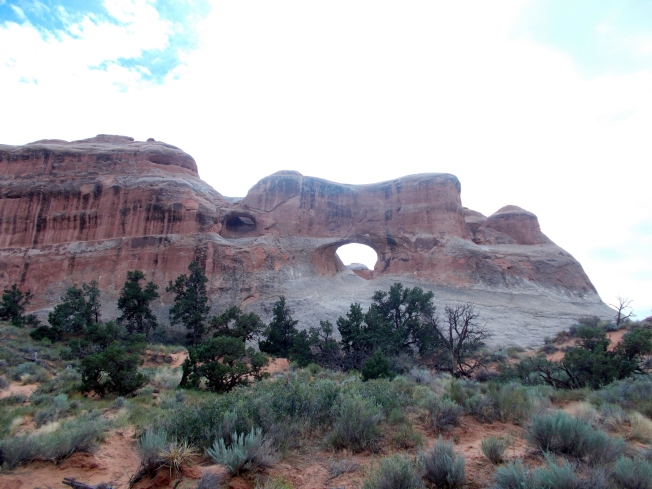 See that tiny green figure to the right underneath Pine Tree arch? That’s not a tree, but me in fact. Try not to step on a cactus or make the ants angry as you tread the sandy paths after it. 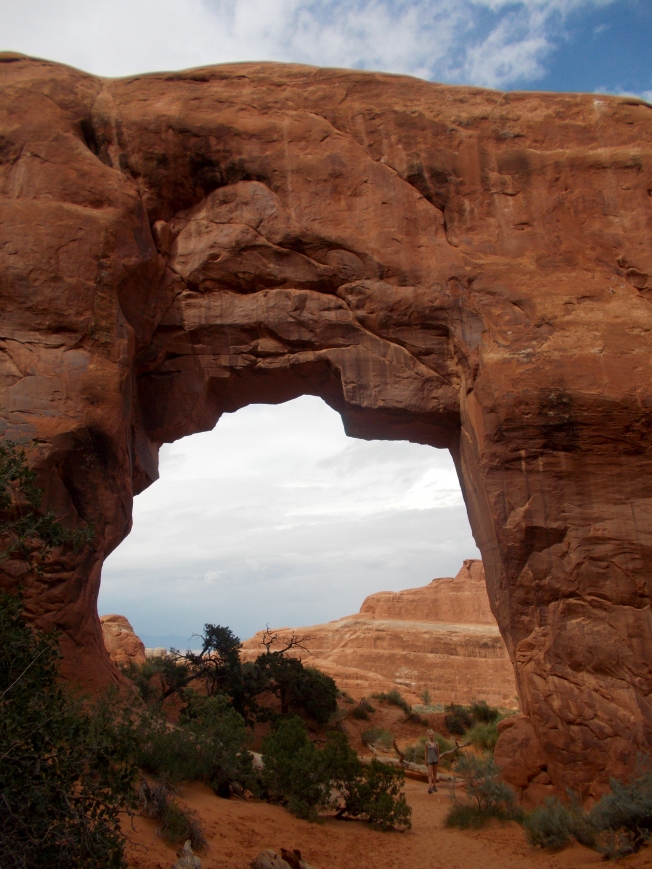 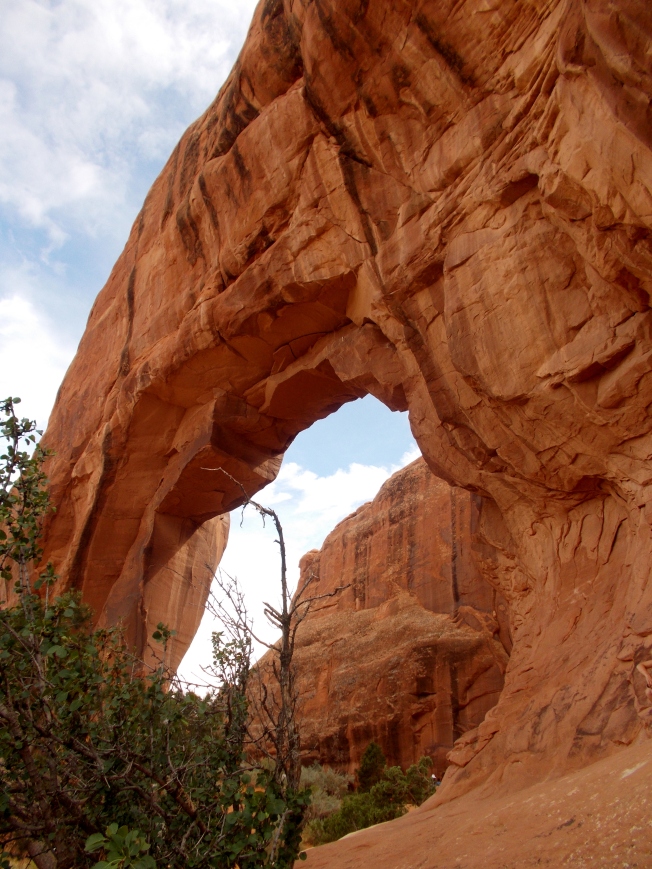 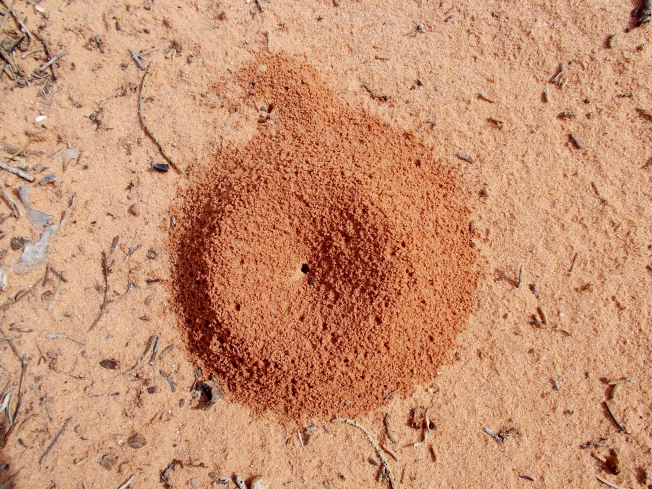 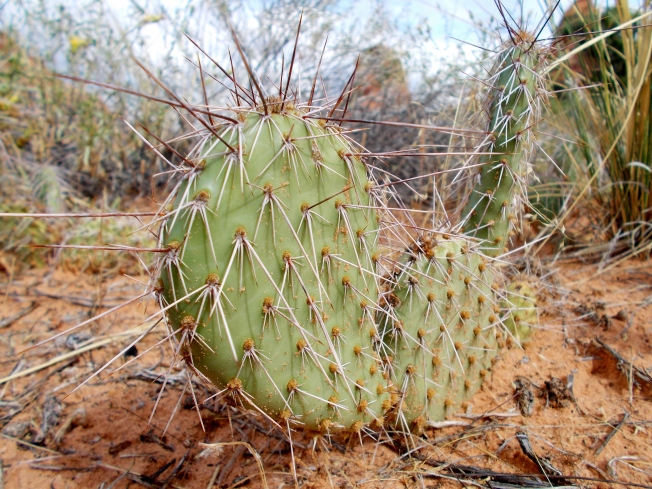 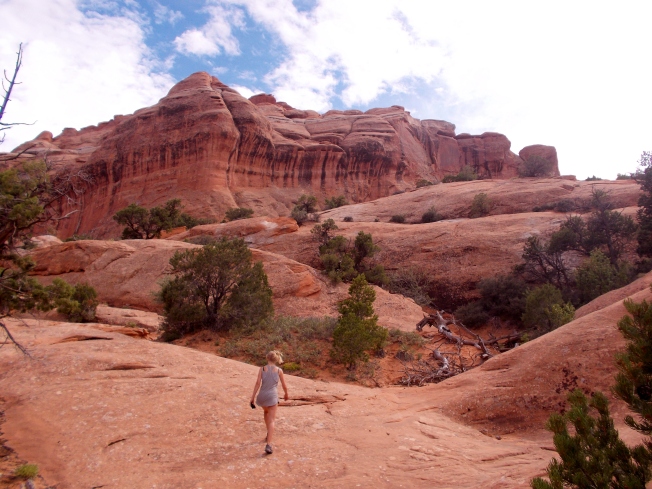 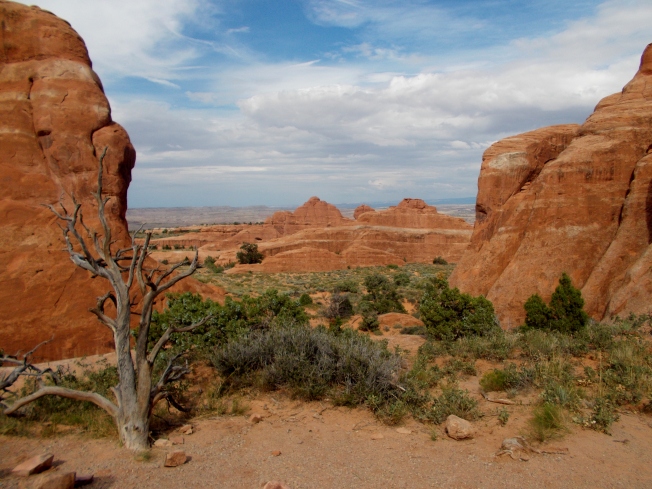 The most popular arch in the Devils Garden section is Landscape Arch, which boasts the title of longest recorded arch in the park (if not the world?) with a measurement of 93m across. Its thin frame has formed from three separate occasions since 1991 of sandstone falling away. Who knows how long it will hold together? 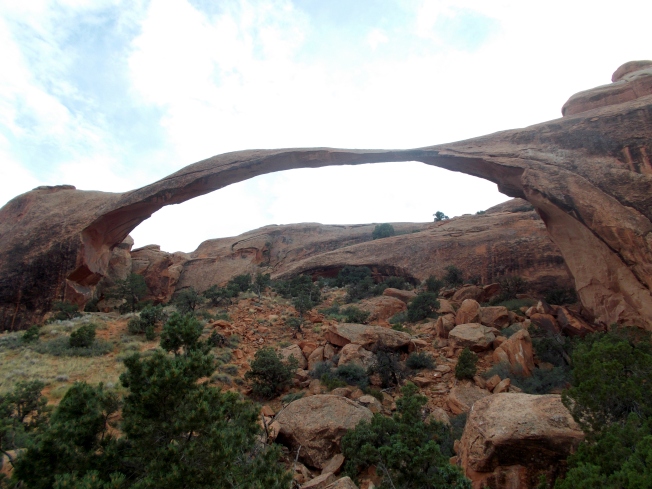 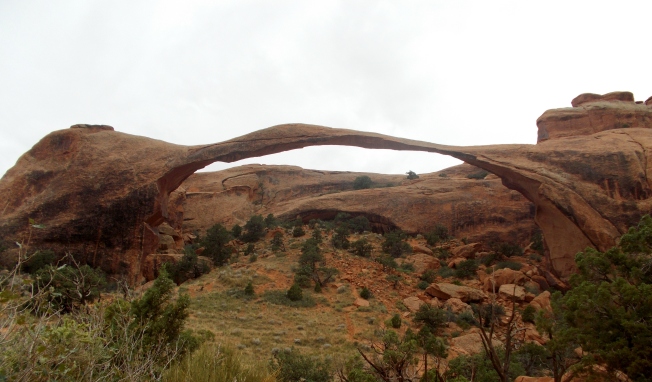 Partition Arch follows shortly after, but thankfully fewer tourists do too, so there’s more space for shameless poses… 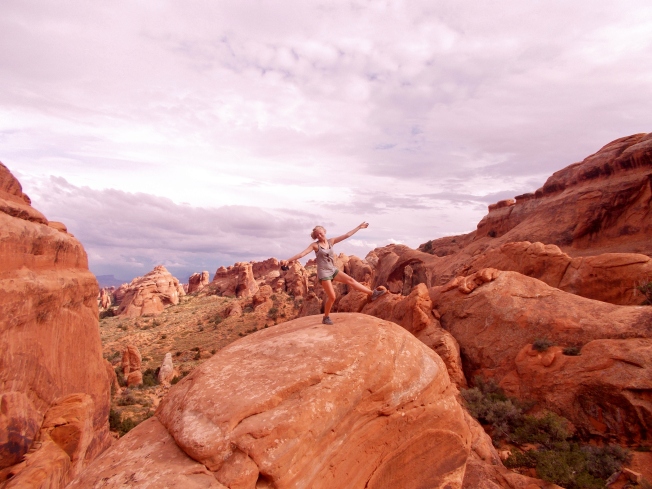 As you carry on along the fins of the Devils Garden Trailhead, you could be forgiven for forgetting that you’re still on planet Earth. With the park located on the Colorado River, its bewildering landscape has been formed by a continual geological process taking place over millions of years. Beginning as a salt bed caused by an evaporated sea, eroded rock sediments have been carried by a sea current and crushed together to make sandstone, before being layered and re-layered on the salty sea bed. Some layers were thrust up above the surface as salt domes, with a continuous process of erosion breaking off segments of these to give the rocks their distinctive arch-like shape. 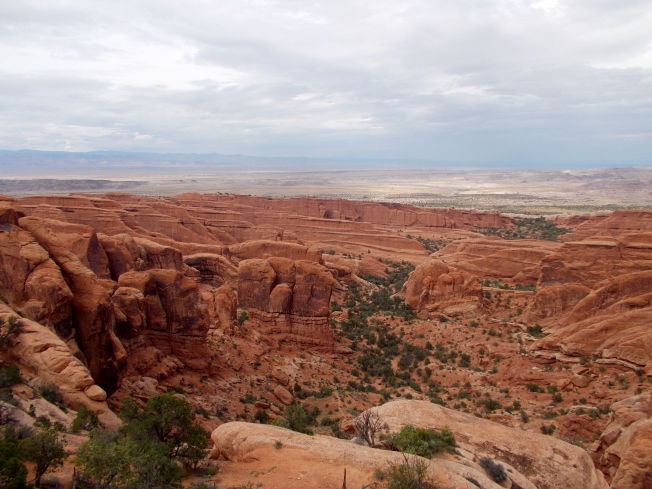 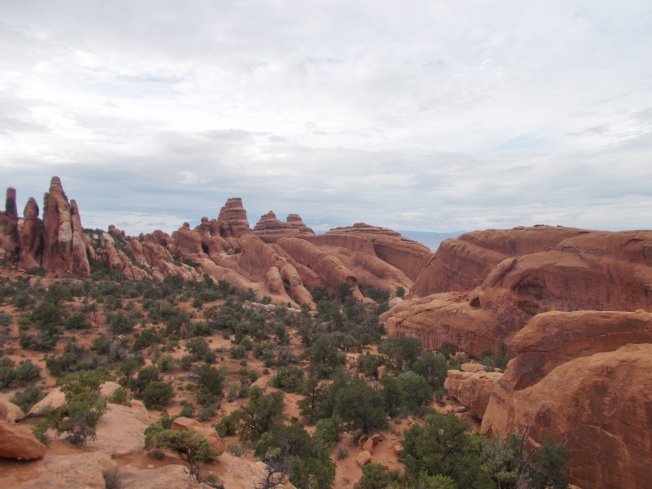 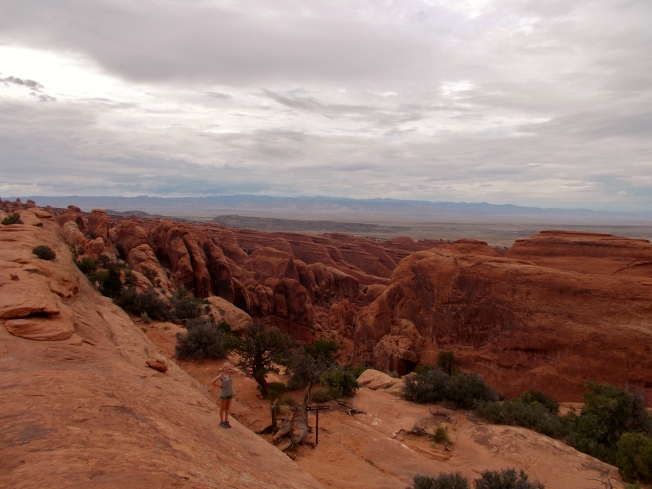 You’ll often stumble across random arches here and there. I’m still not sure of the names of all the ones I saw, such as the one below. But it’s the sights that will ultimately stick in your memory, and not the names. 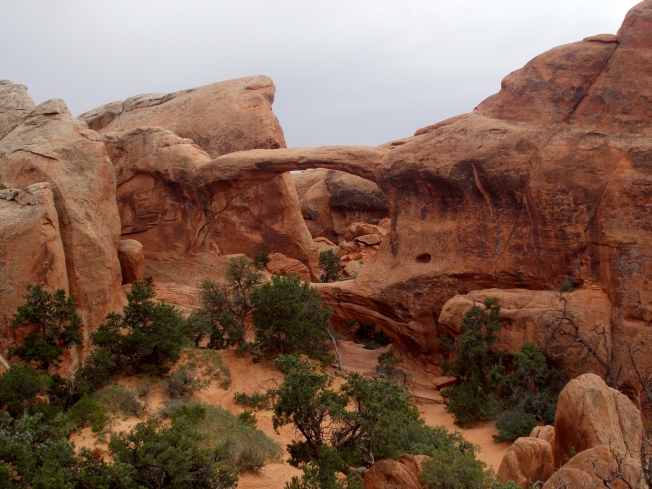 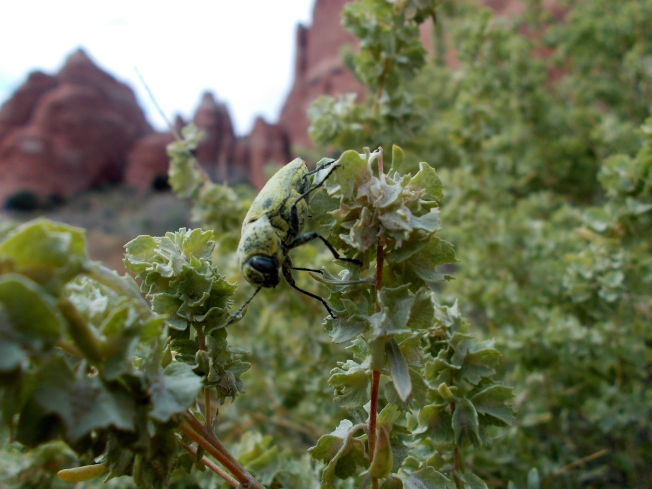 The Tower of Babel and the Organ have a domineering presence in the Courthouse Towers section near the entrance and exit of the park, especially on the morning after a stormy night. Their titles perfectly suit their tall, rigid structures. 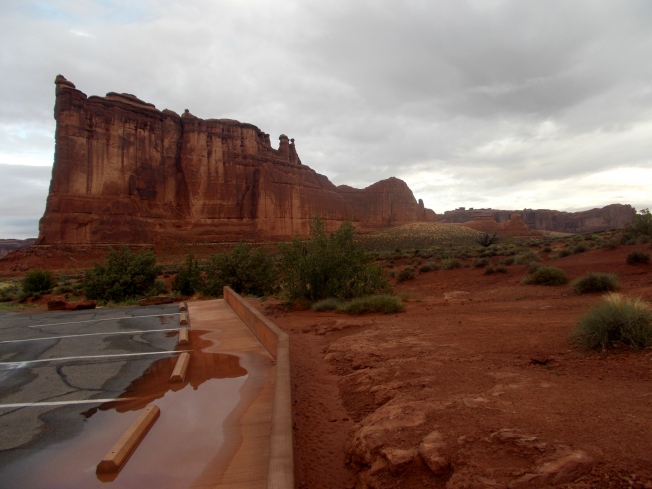 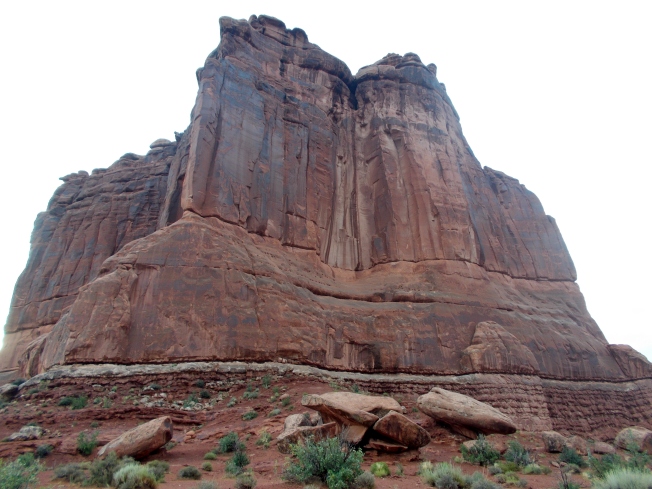 Meanwhile, here I am eating breakfast whilst the Three Gossips have a chinwag behind me… 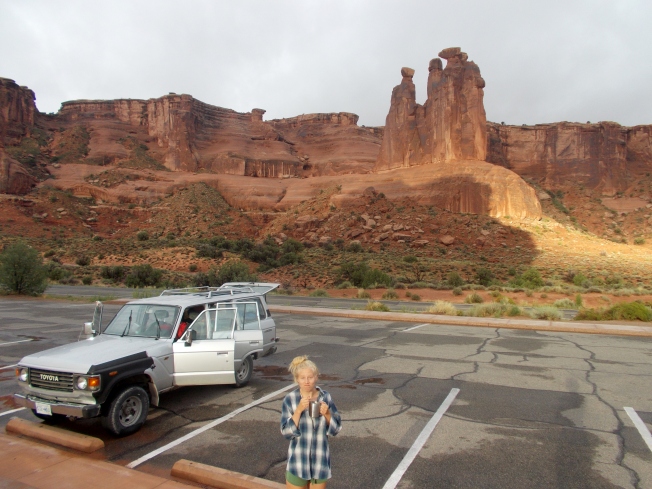 The Courthouse Towers Viewpoint looks exactly like its namesake – a row of judges standing up in a high courtroom, summoning the audience’s attention as they deliver their verdict on the tiny green men below them. 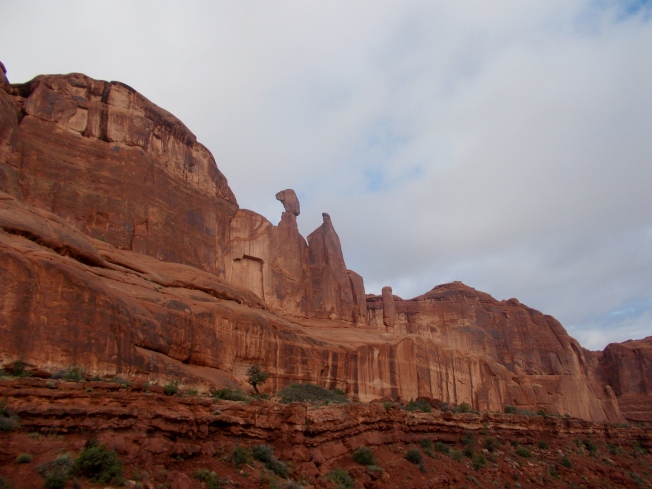 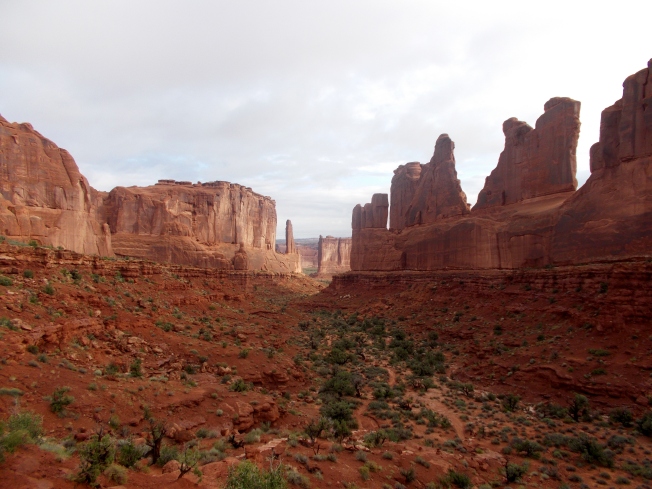 Being imprisoned on this planet wouldn’t be such a bad thing though. There are plenty of areas to run away to, and nooks and crannies to explore. Let yourself get lost in the red maze of arches and enjoy a brief escape from Earth.

Sunrise walks in Iceland ⛅
Postcard-perfect views ❄️
Anyone else had one of those weeks where they've really felt like turning off the alarm and going back to sleep instead of getting up to a dark sky outside for work/childcare?
Got the email today that my UK passport renewal application was approved and is on its way 🙌.
The forecast is predicting snow showers for Victoria this weekend, and I'm all for it!
Yesterday I finally got my refund from Air Transat for my cancelled 2020 flights. The notification was uplifting and saddening at the same time!