There’s something immensely satisfying about the tasty sensation of sweet strawberry jam on toasty-warm buttered bread melting in your mouth. Sugar and carbs are a crime to some people, but even if you look back later with regret,  deep down they make you feel great at the time. This leads me onto the term ‘jammy’. For those who aren’t familiar with this word, ‘jammy’ is another way of saying lucky…in a sneaky way. Things jam together favourably when they perhaps shouldn’t have. It’s something that many people experience, and normally relates to the issue of expense, or rather, an unplanned lack of it! Whether it’s being under-charged for the grocery shopping, or missing a fine from the parking attendant by seconds, a little part of us might feel bad about it, but a big part of us is also likely to feel pretty great about it! My best day of jamminess came in August 2014 when I was in Yellowstone National Park during a road trip.

The first incident involved the showers at Roosevelt Lodge. Eight days into the trip, washing had consisted of swimming in lakes. A sign at Tower Fall campground said that showers would be available at the lodge. Since there was no mention of price, it was naturally assumed (out of poor-student hopes) that usage would be free. Wash bags at the ready, my chum and I parked up and asked a guy in his early twenties where the showers were. “Are you two staying here?” he asked, looking us up and down uncertainly. Perhaps it was obvious it had been eight days. “We were told we could use the showers here,” I found myself saying confidently. It wasn’t a lie; this is what the sign had said. After his unconvinced nod and subsequent directions led us to a plush washroom, I realised that I had got here from unknowingly giving slightly false information. He was thinking I’d meant a member of staff at the lodge had granted permission, not a vague sign. As I enjoyed a long warm shower complete with free soap, shampoo and conditioner, I felt a little guilty knowing that I shouldn’t really be here. Then I spotted a large stack of sanitary towel disposal bags in the toilet cubicle, and all guilty thoughts evaporated into the surrounding mist from the shower as I stuffed a few of them into my bag before walking out fresh, clean and content with my free find (because when you’re on the road living in a car with a boyfriend, maintaining hygiene during that time can be quite difficult…)

Later that day after exploring the Norris Geysers, we drove down to see Old Faithful. This famous geyser erupts on a random time scale that is on average once every 60-90 minutes, and is so popular with tourists that a highway is in operation to facilitate the large flow of traffic. Managing to quickly find a space in the huge car park, we casually strolled over to the viewing area, unsure what to expect having not researched the estimated eruption time. The walk was interrupted by a bathroom stop. Then we finally made it to the viewing area where we were greeted by the sight of a huge crowd of at least 500 people pinned against the fence. Many had perhaps been sat waiting for 50 minutes. Five minutes after our laid-back arrival, the geyser’s big moment arrived as it shot steaming hot water high into the air, reaching an elevation between 30 and 60 metres. You can get an idea of how long the water keeps spurting out for and how big the crowds were here. As we walked away 10 minutes later and passed people with looks of frustrated disappointment on their face upon realising they had just missed the eruption, I again felt a flash of guilt. Considering we had not checked the predictions and took a risky pit-stop on the way, we were extremely lucky to have made perfect timing. 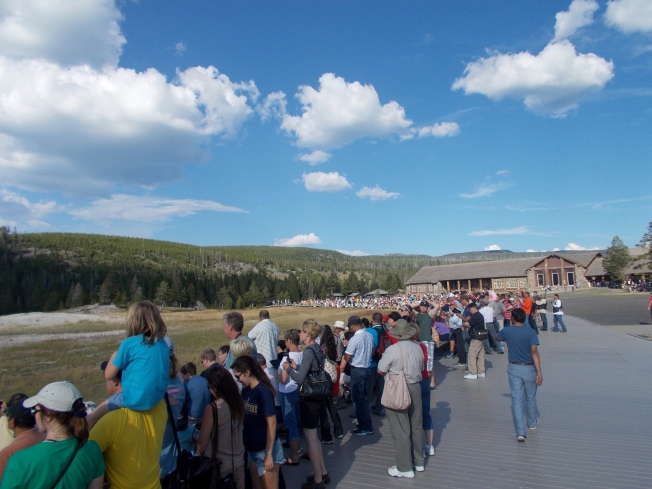 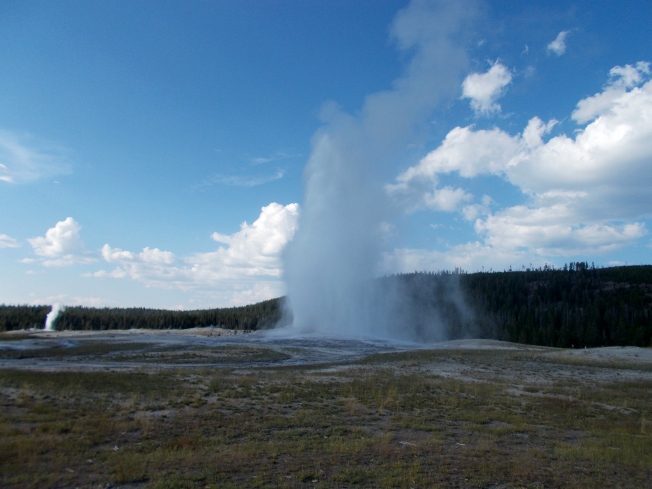 Next we had to find a place to sleep for the night. All the campgrounds south of Old Faithful were full, so we drove on into the Grand Teton National Park. While we searched hopelessly for campgrounds with space, dusk started creeping in. We procrastinated from our challenge by admiring the sunset over Jackson Lake. 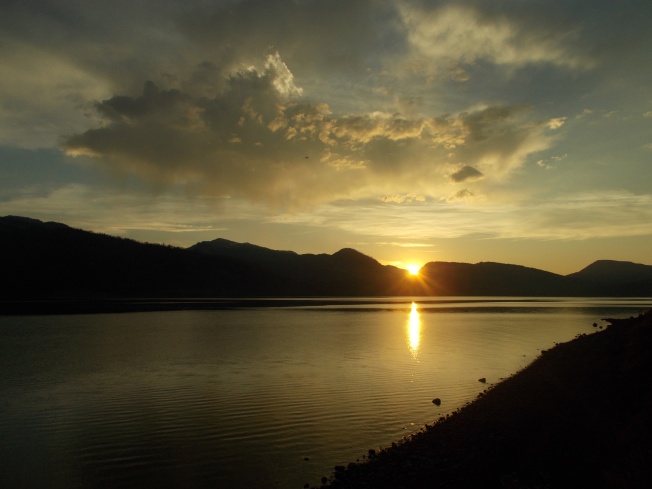 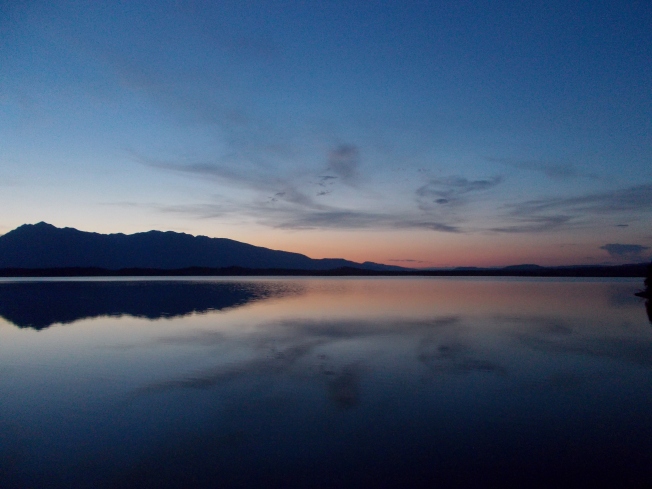 I said I would drive on to Jackson in Wyoming if necessary, but it was still about 4o miles away and both of us were tired from a hot, busy day. Just as our destination-less driving began to turn increasingly stressful, a sign advertising a lodge came into view, tempting our desperate selves to flick the indicator right. But would we paying to sleep in a room at the lodge? Of course not! We were thinking about the prospect of available parking space. We’d slept in a hotel parking lot before, however it had been situated outside a national park. Sleeping here seemed a little too risky. What if our car’s licence plate was checked against guest records? Maybe we would simply be asked to leave, but maybe we would be fined too. We weren’t sure of the rules, and asking would only arouse suspicion.

Alas, after much debating, we agreed to stay and parked up near other cars so that we didn’t stand out more than we already did (being in a dirty 1986 Land Cruiser in the parking lot of a rather fancy lodge),  before closing the curtains and quietly settling down for the night. I didn’t sleep too well, worried about being caught. Butterflies would creep up my stomach when I heard approaching voices or a car door slam next to us. At one point I heard youths laughing outside our car, clearly recognising what we were doing. I silently pleaded that they would leave us in peace.

Our alarm woke us at 6 a.m for a quick getaway. But having survived the night, we were feeling a little more complacent, so we stepped outside to have a look around. The lodge was right on the edge of Jackson Lake. We followed the path down to the water’s edge, boats sitting silently on the serene surface. Moon still beaming brightly, the warm sky cast a soft pink glow over the Tetons painted with streams of snow. Candyfloss and ice cream. The only sound to hear was the faint bobbing of the boats and gentle lap of the water against the shore. There was a cold snap in the air, but something about this sight made me feel cosy inside. After waking up to this view, I was glad that we had taken the risk of sleeping here. Most people would have to pay a minimum of $269/£179 per night for the view at this time of the morning, but we had got it for free. Soon after, we remembered not to risk our chances too much and left the car park with frost on the windows still clearing, feeling both extremely lucky and extremely sneaky. 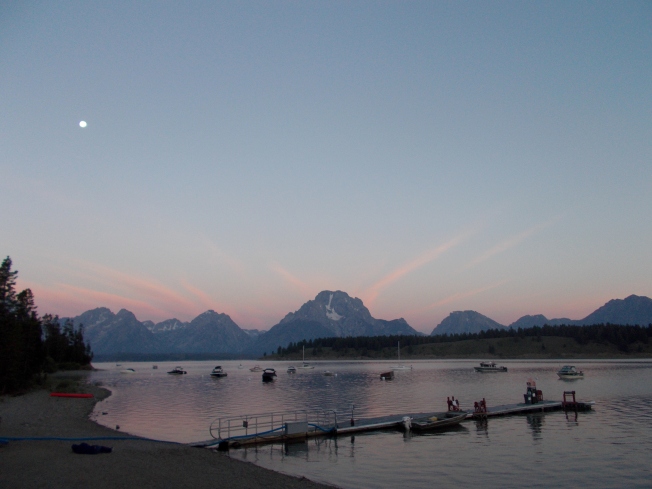 Whilst this was the most jam-packed day of jamminess on the trip, there would be further jammy moments to come, including sleeping in a viewing area inside a national park. Campgrounds were full, and nowhere did we explicitly read or hear that sleeping in cars outside a designated camp area was prohibited. Camping in a tent would of course have been much too extreme, and if the park had contained bears, we wouldn’t have made the decision to sleep there, in case they were able to break into our car for food. We were very careful and respectful towards the environment, leaving no rubbish behind and causing no damage. Our decision was partly influenced by the stormy evening weather and concern about how good our brakes would be descending the wet roads leaving the park. But really there was also the question: “how often am I be able to wake up to a view like this?” It was a once-in-a-lifetime free opportunity. If we hadn’t done it, we’d have definitely lived to regret it. As we left another national park the next day and noticed a ranger taking notes and talking to a sheepish-looking man with a trailer parked in a viewing area (who we had also happened to see settle down in another national park previously), we realised how fortunate we had been to dodge a fine. But the risk had been worth it.

Young and carefree – that’s what the elderly fondly recall being when they were younger. Reading my dad’s memoirs, I’ve been amazed by some of the things he and my mother got away with as young travellers, such as sleeping in a graveyard somewhere in New Zealand, or on someone’s porch steps in the States. Today, such activities would be condemned and they would probably be classed as poor, dangerous vagrants, when in fact they went on to lead successful lives in the medical profession.

Is it wrong to be a jammy traveller?

When you’re young, money is tight. This restriction doesn’t combine too greatly with youthful curiosity, especially since this is realistically the time when you’re in the best shape to explore and take physical risks. Humans have been able to survive and evolve over time by choosing options that enhance their chances of survival without involving significant  physical harm and exertion. Hunters and food-gatherers would happily take berries from a tree in a rival tribe’s territory if their access was not threatened and the food would help prolong their lives. It makes sense that in today’s age of consumerism, the importance of minimising physical harm has adapted into an importance of minimising financial expense. It’s ingrained into our human instinct that we should do anything that makes our life easier and more enjoyable with as little cost involved as possible.

There are certain things I would never do, like not pay the entrance fee to a national park. My moral conscience would be unable to allow that. These parks protect outstanding areas of natural beauty and they should be supported in doing so. Regarding smaller issues though, it is easy to say “I will always abide by the rules”, but when it comes to the moment, you might be surprised by how tempting it is to take an opportunity and run with it. I am of course not encouraging illegal acts, so please don’t rob a bank after reading this. But sometimes being a little jammy leads to the most memorable travel moments. In the corny words of Luther Vandross and Janet Jackson, the best things in life are free!