‘Luxury’ and ‘comfort’ are two words often associated together when discussing travel. Luxury is defined as ‘something that provides pleasure or comfort’. Comfort is defined as being in a ‘state of physical ease with freedom from pain or constraint’. However for me, it came to be that during a morning in Geneva, Switzerland, the two did not fit agreeably in the same bag, and instead made quite an uncomfortable experience.

Having rushed to catch a train to Geneva on a Saturday, I arrived in the city on an empty stomach having not had time to eat breakfast. I studied the station map closely to look for lockers where I could store my backpack, and went wrong twice. When I finally found the area shown on the map, I still couldn’t see them. Commuters were rushing around so it was hard to find anybody to ask, and I couldn’t seem to find any staff. Fed up and not wanting to waste time exploring, I decided to just take the backpack with me. Big mistake.

If you walk down the Rue des Alpes onto the Quai du Mont-Blanc, you can admire the famous Jet d’Eau which shoots seven tonnes of water into the air, towering over the flock of yachts that look up at it in silent awe. Flicked by the sun’s rays,  the water was sometimes painted with rainbow colours. Swans glided over the shimmering water (the blue colour of which was a pleasant change from views of the Thames) which flows in from the River Rhône. 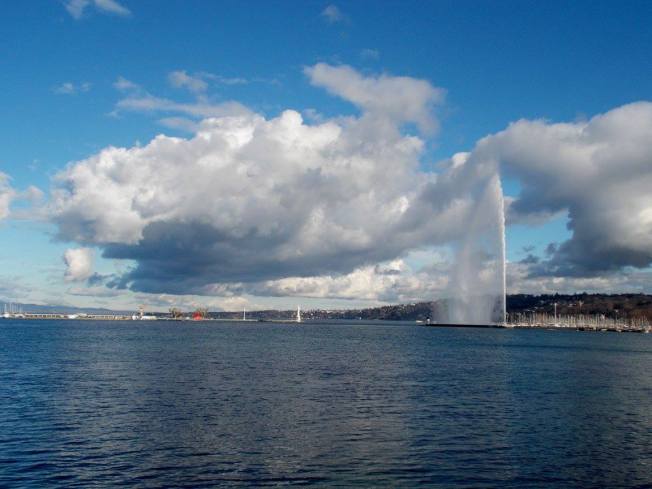 Crossing the Pont du Mont-Blanc, you reach the (supposedly) English Garden. It’s a pleasant enough place, but unfortunately being located next to a busy road, it’s difficult to escape the noise of traffic. It’s a bit like Russell Square Gardens in London, with joggers and dog-walkers meandering around its paths (albeit without the squirrels). The Doobie Brothers ‘Listen to the Music’ played outside a café as I walked through the garden towards the main town, passing an Asian couple taking a zillion photos posing with their fore-finger ‘on top of’ the Jet d’Eau. 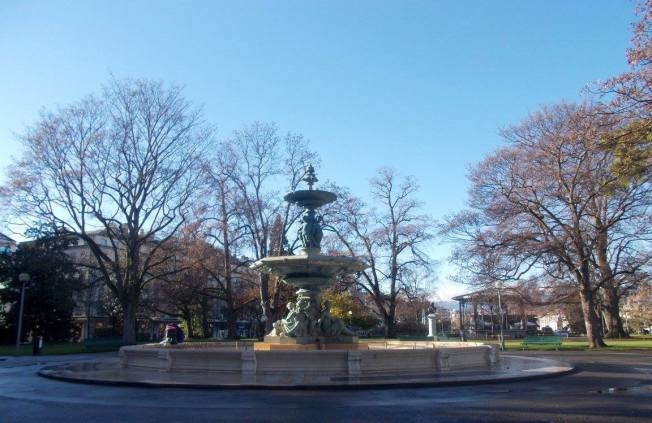 Geneva’s atmosphere evoked the characteristics almost typical of what one associates with Switzerland as a nation – impersonal and rich. Walking past the likes of Rolex and Louis Vuitton with my grubby backpack, I felt slightly out of place. Nevertheless, I was stopped twice to be asked for directions, so I must have looked like I knew what I was doing! I scanned the sides of Rue du Marché for a supermarket but was unsuccessful, seeing only cafes and bistros instead. All I wanted was something small, quick and cheap! But it seemed my stomach would have to wait.

The sights grew less ostentatious and the atmosphere less snobby as I approached the Old Town. By now I was getting tired from hunger, and my shoulders felt sore as I trudged upwards along narrow streets. A man on a bike rode past with his son sat behind him, the little boy’s open mouth rattling “ahhhh” as they bounced over the bumpy cobble roads. I noticed a Co-Op bag in the dad’s hand, but could only watch helplessly as he cycled away.

My feelings of hunger were temporarily forgotten when I was greeted by the striking sight of the Cathédrale Saint-Pierre, built in the 12th century. Visitors can climb 157 steps to reach the top of the North Tower for views of the city. With my backpack however, that seemed to be too much of an ask, although looking back I should have checked if there was somewhere to put it. 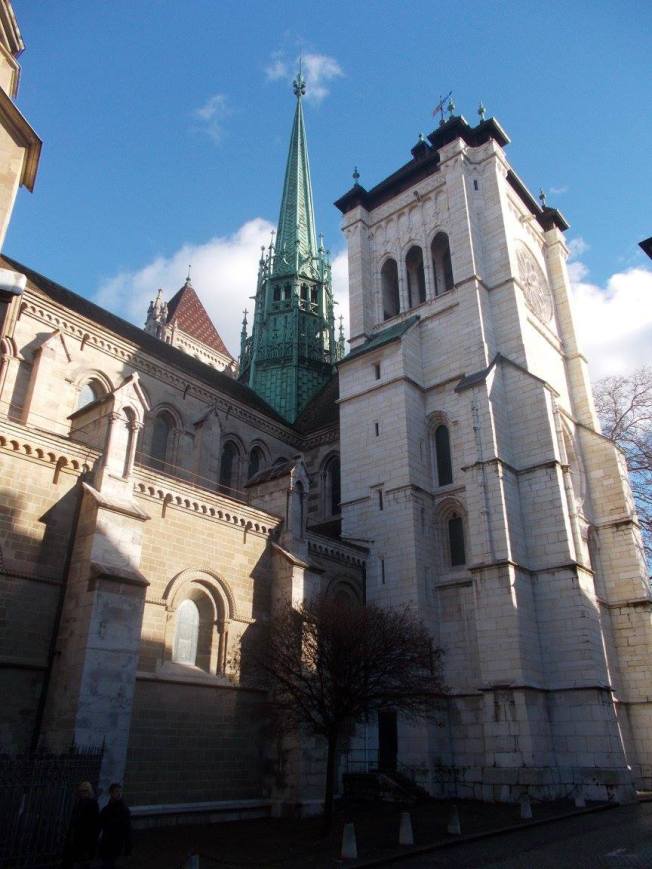 Walking west from the cathedral, the smooth stone on the buildings reminded me of that seen in Bath or Edinburgh. Ahead there was a balcony overlooking the Parc des Bastions, famed for having a giant chessboard and monuments of famous figures from the Reformation. In summer I can imagine it to be a lovely area, with a tree-lined promenade and space for picnics and games. But seeing the muddy grass and dull, leafless trees, I decided not to make the journey down to it today, especially in my state of soreness and hunger. Instead with a sigh of relief, I released my backpack and sank onto a bench. A young mum sat opposite me with a pram, looking depressed. In fact, there weren’t many cheery-looking people around at all! I could probably discount myself as one of them too. By now, my stomach was rumbling loudly with hunger and I could feel two tight knots forming on my shoulders.

A flashy Range Rover drove down the Rampe de la Treille as I set off back towards the city centre. Private cafes and boutiques lined the quiet Grand Rue. They seemed to say ‘Only enter if you have lots of money’. Reaching the bottom of the hill, the traffic noise vamped up and a tram clanged its horn. I quickly explained to an approaching charity rep that I wasn’t a Swiss citizen and, dodging bikes, crossed the road determined to find a supermarket. I had no idea where to look, choosing to walk up a random street, only to stumble across a Manor shopping mall. Hurrah! I rushed inside like a kid desperate for the toilet. The food court was manic. Two Brazilian men asked for my recommendation of which brand of chocolate to give someone as a gift. I said Lindt. After nearly clearing some shelves and taking a child’s head off with my backpack, I was outside with food in a bag.

My energy rejuvenated from the knowledge that I would soon be able to eat, I strode back over the Pont du Mont-Blanc, back to the Jardin Anglais. Just as I was about to bite into a sandwich, I noticed a scruffy man sat on a bench 20 metres away drinking from a Heineken can staring at me, and stopped myself on the basis that I might have to move away. After deciding that he posed no threat with his drunkenness, I carried on gorging, watching with amusement as more Asian groups posed on the fountains. An old man with ragged clothes and a backpack greeted me with a “bonjour”, dragging a trolley next to him. Glancing at him and the drinking man, I realised that on the first impressions of others in this city, I probably had more in common with these two than the majority.

I still had an hour and a half to kill before I needed to be at the airport, but with my backpack, I felt no desire to wander around anymore. There are many interesting places in Geneva north of the river that I’d love to visit, such as the Palais des Nations (UN), CERN and the International Red Cross museum, but today wouldn’t be the day. Not only was my back cursing, but my bladder was now almost bursting. Instead, I forced myself to heave my backpack on again and walked back alongside the lake, amongst lycra-loving cyclists and tourists ogling at the water fountain.

In summary, I didn’t get a great impression of this small city. Through its display of luxury, it seemed quite uninviting and too money-orientated for my liking. But this impression wasn’t helped by my lack of travel comfort. Without this, I was restricted in my options and my views were tarnished by my self-pitying frustrations.

Lessons learned: 1. Eat breakfast; 2.  Even if it takes a while to do so, find a luggage locker.

In different circumstances I’ll happily give Geneva a second chance and see if I feel the same way!

If you plan to tour Geneva and would like to use this article as a guide, with GPS included, please follow this link to download it!