In the past couple of weeks as I write this post in November 2014, a rogue artist from New York has been in the news for vandalising some of America’s national parks with artistic graffiti. As expected, this activity has been condemned by both national park rangers and the public. Type ‘lady defacing national parks’ into Google and the top searches begin with the terms ‘awful person’ and ‘terrible human’. The perpetrator has been slammed for drawing these images and uploading them to Instagram, i.e. for seeking fame and attention at the expense of nature.

I of course was also appalled when I heard about these acts , especially as I have many special memories of the magnificent topography in some of the victimised parks – including Canyonlands and Zion – that were formed only weeks before these images were drawn. But then I thought about this issue some more and asked myself: regardless of spray-paint, are tourists not already defacing the nature of the parks? Through our own desires to find fame from capturing the best photo of a wild animal, are we camera-crazy (albeit well-meaning) humans not causing harm too? Harm that is subtle and unintended in nature, but still damaging to nature’s routine.

The other day I read the George Orwell classic ‘Animal Farm’. Published in 1945 and banned in the USSR for its anti-Stalin sentiment, the beginning of the story involves the animals of a farm rising up in rebellion against their greedy human owner and establishing control of the farm themselves. As I read the (highly-recommended) novel, I thought back to the encounters I had with wildlife during my American road trip this past summer.

I thought about the Rocky Mountain goats in Glacier National Park being woken from their afternoon naps by invading tourists trying to take a photo of their babies. Often the mother goat would nudge her kid to its feet and they would trot off to find a new secret place – something hard to find on the particularly popular Hidden Lake Overlook trail. People would watch them go almost offended, as if it was an insult for an animal to reject human advances.

I thought about the bison in Yellowstone demanding that traffic come to a standstill while they marched across the road to new pastures. For all I know, their deep grunts were a sign of resentment towards the cars that clogged the man-made partition of their resources. I was surprised at how gentle they were; they were more than capable of causing damage to the monstrous RV that obstructed their path, by bashing their huge heads against its artificial walls in a determined declaration of  “We were here first.” 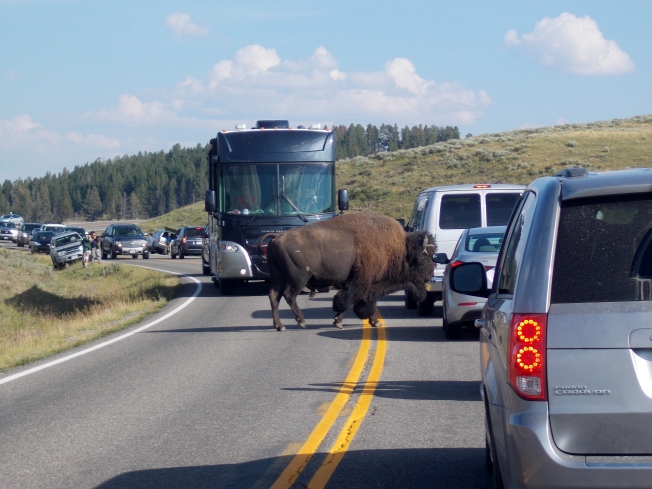 I thought about the regular signs on the roads of Yosemite that reminded tourists to drive carefully, citing recent bear fatalities (reports state that so far this year, the figure is at 25). How ironic that in our quest to see a bear, we actually end up killing them? We contradict the whole purpose of a national park to conserve a species. It is in Yosemite’s campgrounds that keeping food in cars is prohibited, since recently a few bears learned how to open doors. These bears were then destroyed to prevent the trait being learned by others and to avoid human casualties. But is it not humans that are invading the bears’ space, rather than vice versa?

Finally, I thought about the large group of elk on Highway 101 just outside Redwood National Park, who caused a traffic jam when they decided to block part of the road. I remembered a man with long hair who drove a VW campervan videoing the scene and asking out-loud, “What does this mean, animals blocking a man-made road?” At first I had smiled to myself at this apparent hippy-expressionism, then I realised that he actually raised an interesting question. Was this group behaviour a form of defiance against man’s interference in nature? 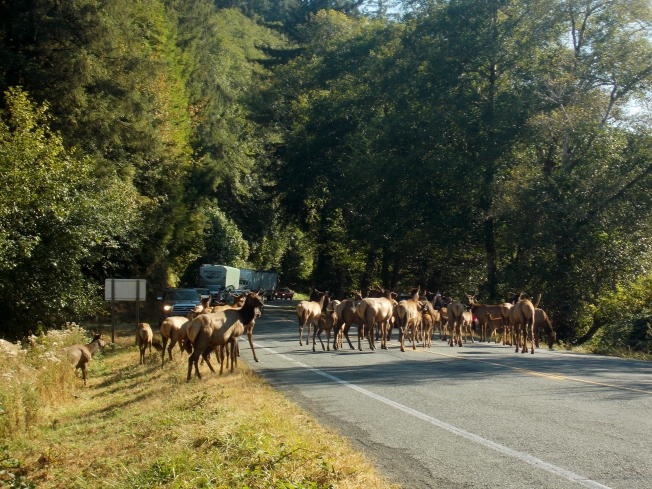 Does our greed as humans for viewings of rare wildlife touch on the verge of exploitation? Are we not slightly reminiscent of the white man colonising sparse lands in order to generate revenue, killing native inhabitants in the process? It should be mentioned that it is because bison were brought under conservation in Yellowstone that the species was protected from poaching and was subsequently able to grow in numbers within the last century. But back when the park was established in 1872, who was to know that these animals would eventually become the target of the tourist paparazzi? For it has become human nature to stalk the world’s rarest wildlife through a lens.

Obviously tourists, including myself, want to get a close look at wildlife; it’s only human nature. Personally however, I try to respect animals’ privacy in doing so and not disturb them from their natural state. It’s the same way that I would attempt to be discreet if taking a photo of a human stranger doing something interesting, if it was a situation where asking for permission would ruin the moment. Animals have no voice to give consent and therefore cannot be ‘asked’ in the way we humans are familiar with, but that doesn’t mean they condone the behaviour.

After reading ‘Animal Farm’ and thinking about these issues, it almost seems plausible to imagine these animals calling for a revolution against us human tourists.

But then there is the issue of squirrels. At first, it’s cute and endearing when the tame, chubby ones in Zion scamper over to your feet and look up expectantly for food with their tiny paws out like Oliver Twist. Even my friend and I were at first caught in the trap of taking photos and ‘awwww’ing at them. However, you then see them picking on the skinnier squirrels, consequently depriving them of food. Like in ‘Animal Farm’, those animals that interact with humans benefit, and it becomes the case that ‘all animals are equal, but some animals are more equal than others’. If humans weren’t feeding these squirrels, the inequality within the species would be smaller. Like the British Raj in India, it seems that human tourists have cemented power through a policy of ‘divide and rule’. Perhaps if the intrusive human presence left, the animal kingdoms would disintegrate into a state of instability and corruption.

Of course, I expect many people reading to view the idea of an animal rebellion as an eccentric, far-fetched vision. But it is easy to imagine innocent things, just like it is easy to harm innocent beings. As history has shown, both are only human nature.

Spring is on its way! I can already feel my mood lifting as I walk to and from work under lighter skies 🙂
Comparing 2 passport photos taken within 10 years of each other 📸
Sunrise walks in Iceland ⛅
Postcard-perfect views ❄️
Anyone else had one of those weeks where they've really felt like turning off the alarm and going back to sleep instead of getting up to a dark sky outside for work/childcare?
Got the email today that my UK passport renewal application was approved and is on its way 🙌.