I’ve been studying in London for almost three years. The more that I’ve gone home or gone travelling in this time, the more I’ve realised how life in London is so rigid. Every day I walk the same route to university, or the library, and every day I see the same scenes: businessmen in suits storming along the pavements, phone pressed to their ear, frowning with impatience as they deliver an order to someone whilst frantically waving their arms at a taxi; women in pencil skirts and high heels gossiping with their co-workers about that lady who works on reception, Starbucks lattes in hand, handbags perched on their lower arms pretentiously. Their lives seem so ordered – everyday they must go through this same routine. Some of my friends aspire to have this lifestyle when they graduate. They want the smart work clothes and the City jobs. But to me it just epitomises stress and restriction – something I don’t want to feel on graduating from university at the age of 22. Yes, it may also involve lots of money, but are these people actually happy? Are they content with the thought that this same daily routine may be their life for the next 30 years or more?

One day, I decided to walk home a different route from the library. It took a little longer than my normal route, but in doing so I discovered different sights and sounds, and that made it worth it. There were fewer people in suits and ties shouting down phones, fewer taxi beeps and red buses, no men outside tube stations trying to hand me leaflets I didn’t want. Instead I walked along quiet cobbled streets past quaint little private wine bars playing music, my route decorated with planted shrubs and couples walking hand in hand. It was a refreshing change. ‘Why be boring and go the normal route as always?’ I thought. The walk reinforced my idea that after university, there is no essential need to follow one path. Instead, one can be spontaneous, find a starting project, and go from there, seeing where it takes them. There are so many options, so why not start exploring them?

A key motive of this mindset of mine comes from my time in Iceland. My night in Selfoss was the last I’d have on my own before staying with a host in Reykjavík for a week. My plan the next day was to head back to Reykjavík and spend the day wondering around before going to meet my host. I could go visit a few of the museums I hadn’t been to, and maybe check my emails for the first time since arriving, in case someone had contacted me about something important. It seemed like the sensible thing to do.

In the morning I woke early to catch my 8.30 bus, dressing in jeans and normal trainers. The sun was out again. It was a shame my plans for the day involved being inside. I sat down on the kerb near the bus stop, leaning my weight on my backpack, and going over what I’d done so far whilst here. It seemed like a lot for four days – national parks, whale-watching, glaciers, waterfalls, volcanoes. I hadn’t been to all of the key areas, but the list seemed decent enough.

Suddenly a bus arrived around the corner. It was headed to Landmannalaugar, a place I hadn’t seen but had heard lots about. A couple next to me walked over to it with their backpacks. I watched them go, feeling curious. In my jeans pocket was my dog-eared bus passport. I’d paid a lot of money for it, and it hadn’t been completely used up. Landmannalaugar was one of its valid destinations. I sat upright and looked over at the bus again. The driver was stood outside, resting his head against the side in the direction of the sun, eyes closed. I was tempted to go, and there didn’t seem to be any reason not to, especially not financial. ‘But you already decided you’d go back to Reykjavik, and you’re not dressed for hiking,’ a voice in my head said. I slouched down again.

Then I thought about my plans for the day. Did I really want to be in an urban area, when I could be outside in a rural landscape? Was I really bothered if anyone had contacted me? Did I really want to wonder around a museum when I could do this anytime in London? I imagined my dad watching me now, and how boring he’d think I was. So I got on my feet, picked up my backpack and walked over to the bus. As I buckled my seatbelt and the bus got moving in the opposite direction to which I’d originally intended, I felt an almost rebellious sense of excitement.

The journey to Landmannalaugar takes a few hours. Most of that seems to be spent driving over gravel tracks as you get further into mountain terrain. You’ll pass the proud Mt. Hekla at one point. The ‘thud thud bang’ of the bus as it manoeuvres over the rocky surface, jolting you upwards every now and then, makes you feel like you’re making your way over a minefield. It’s amazing that the tyres don’t get punctured. Every so often you’ll think they have when the bus pauses, and for a second you’ll fear that you’re stranded. But fear not – it’s just the bus pulling over for another vehicle, and you’ll see the other driver looking nervous and sucking in their cheeks as if trying to create extra space on the thin tracks. The views will be quite unexciting for a while, as the bus twists it ways slowly around corners and up steep hills. Reading my guidebook to get some inspiration for something to do in my three hours, I soon felt queasy from the constant jolts and turns.

Then just as it feels like your head is forever going to be filled with the sounds of squeaks and rattles, and dusty gravel is all you’ll see for the rest of your life, a wave of soft green rises up into view. On your right you’ll see the idyllic sight of Lake Frostastaðavatn. Its calm face is lined with faint wrinkles and around it, conditioned by the air’s freshness, lie layers of soft brown tones of hair, primped by bounces from its natural character. From here the bus winds its way along twisty paths and splurges through a river crossing to take you to the campsite. People on the bus start collecting their hiking sticks and supplies together, as Landmannalaugar is the starting base for the 55km Laugavegur hiking trail to Pórsmörk.

I got off the bus with no plan, but as I went to fetch my walking boots and another hoody from my backpack, the lack of organisation felt strangely nice. There was a tall mountain in view, and so I made my way there. Bláhnúkur mountain is 940m high, and very dusty. As I started my ascent I felt a bit like the bus, pulling over cautiously to let those coming down pass. It was so windy, but you have to keep looking down at your feet to make sure you don’t slip. I stopped halfway up the mountain, thinking I might go blind if I headed any higher. The views are wonderful. Lava fields lie in front of an patch-worked array of pastel-coloured mountains, tinged with soft greens and browns that run so smoothly like oil on a painting. The scenery here was a big contrast from most other places I’d seen in Iceland, evoking warmth and tenderness rather than cold wildness. 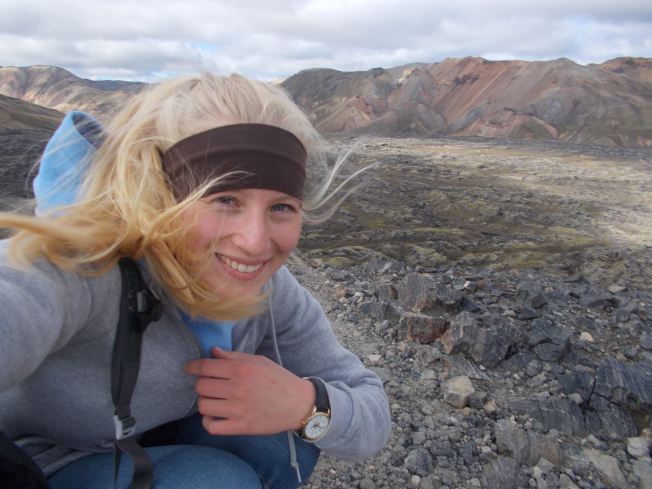 As I stood gazing at the views, amongst rubbing my eyes free of dust, a girl my age came up behind me, and we got chatting. She was French, and this was her first time travelling alone. We ended up spending the remaining hour and a half together, walking over to the hot springs where people bathed lazily, as sheep grazed around them. She was the first person I’d met on the trip who I’d actually like to keep in contact with, not just because I felt I should after spending a few hours with her. And I wouldn’t have met her had I not jumped on that bus.

The day had brought me a new visual perspective to Iceland, allowing me to see a different side to the country, just like taking the different route home from the library allowed me to see a different view of London. The day had signified freedom and impulsiveness, and my trip had been replenished as a result. I knew that had I simply gone on to Reykjavík as originally planned, the day would be nowhere near as interesting and fulfilling.

If people were more spontaneous in life, they’d get so much more out of it. As we approach 2014, my New Year’s Resolution is not really new as such. I just want to keep exploring the unknown and not play safe, but take a new opportunity that arises and see where it takes me.

I've recently started watching the TV show Yellowstone, and I love it! It makes me want to go back to Montana. I love the show for the horses, the big pastures, the mountains, the log cabins, the slow pace of life, and the inclusion of Indigenous peoples. (One of the main actors is pretty easy on the eye too!). It's nice to see a show that ultimately highlights the beauty of natural land and illustrates the way it's threatened by human greed. If you haven't seen it, I recommend giving it a try!
Travelling in a more sustainable way requires a change of mindset. Here are 5 changes you can make to travel greener:
"I looked out over the water with a sigh, wondering if I had made a mistake. I had dreamed of living an exciting life in another country, developing my relationship, working a job I loved, and adventuring every other weekend with new friends. The reality seemed far from the dream."
My new workplace looking pretty among the blossoms 🌸
Spent last weekend up in Cowichan Lake for some R&R. I'd hoped to hike up Mesachie Mountain and had even received permission over email from the owners of the private property the trail crosses. What I didn't do was ask them for directions...
Around this time 6 years ago I was standing here at Gellert Hill in Budapest and an American man around my age asked me to take his photo. He then did the same in return. The difference between us was that he was a solo visitor looking to meet people and form groups that would go to the bars and clubs, and I was a solo visitor looking to do my own thing and find peace and quiet.