Hanalei Bay, on the oldest Hawaiian island of Kauai, is a beach popular with sun worshippers and surfers alike. A standard holiday destination for residents of Canada’s west coast, I was lucky to visit the beautiful island with my boyfriend’s family for Christmas 2015. The islands of Hawaii have a lot of great hiking to offer, but their ocean access is the obvious main attraction. I’ve never actually learned to surf yet (despite having spent time in coastal Australia and Tofino…oops) but body boarding is just as fun an option. That is, when the current is in one of its calmer moods. 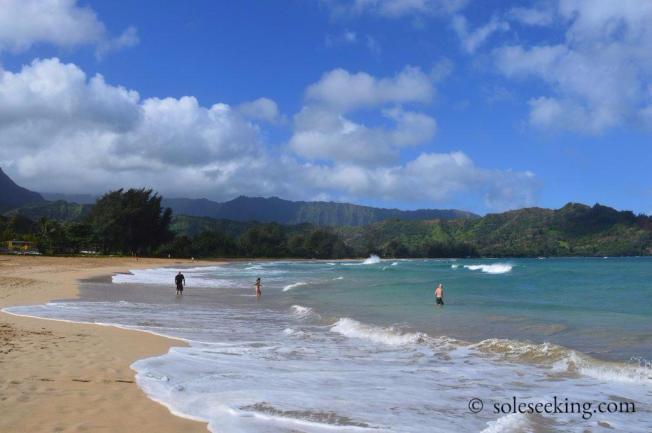 As a child I was quite a tomboy, preferring to play with cars over dolls. I would run around outside getting my hands muddy and occasionally get a bit too feisty when play-fighting my brothers using wooden sticks as swords. (One brother just had a baby so at least I know he’s still fertile…) I could be stubborn and would sometimes get grumpy  when my brothers left me out of their adventuring activities on the basis that I was too young or not strong enough to keep up with them. In school I loved beating loudmouthed boys on the athletics track. I’ve grown up not as a feminist who disapproves of chivalry, but as one who is insistent on independently using my (sometimes underestimated) physical strength and fitness when suitably required, instead of automatically requesting male assistance.

This ethos has particularly displayed itself on my travels and my trip to Hawaii was to be no different. However I faced my biggest challenge in both mental and physical strength during my time in its waters. I’m a pretty strong swimmer, but I soon learned that it takes more than technique and fitness to cope with Hawaii’s waves. You have to have real nerve. My boyfriend had explained to me previously that if caught in a riptide, you should just tread water and let the current carry you to a sandbank from where you can make your way back to shore. Trying to fight against the force of the current would only tire you out, the fatigue potentially getting you in trouble later on.

We arrived at the beach one morning with the body boards. On previous days the current had been relatively moderate but I hadn’t had much of a chance to get out in the waves, so I was quick to grab a board from the car before the boys took them all. Then I looked out at the water and noticed that the waves were looking a lot bigger than normal. My stomach went a little funny. But I didn’t want to miss out again and told myself it would be a fun bit of adrenaline-pumping activity. The boys darted into the water and, putting on my brave face, I followed.

Paddling out, I immediately found myself drifting to the left due to the unassumingly strong current. Being more used to these waves, my boyfriend progressed further out quicker than me without calling back to see how well I was keeping up. Hmmph. Normally I appreciate his faith in my physical ability, but whilst I hadn’t asked him to wait for me, I’d hoped he might think to keep an eye on me in this unfamiliar environment! (Lesson learned: always ask, never assume.) Suddenly he was no longer in sight. Instead, my view of him was obstructed by a large wave that only seemed to rise further and further up above the surface. “Hold the phone, I didn’t sign up for this!” a voice in my head exclaimed followed by various expletives.

The size of the waves can leave someone unused to them in a frozen state of disbelief. I could only stare up in awe at this gigantic wave of water rising metres above me, before hurriedly diving down into the water to avoid being completely taken out. I curled myself into a ball as tightly as I could to minimize the impact, but my right arm was still attached to the board. Soon it would be flung backwards as the board was battered away from me by the thrashing strength of the current. I would close my eyes at these moments, as if fearing I’d go blind by the force. I could only tell from the scraping of my knee or thumping of my arm against the ocean floor that I’d been sent tumbling down, sometimes for what felt like an eternity. However keeping my eyes closed proved unhelpful. As I felt myself rise up, I opened my mouth to breathe when I sensed I was breaking the surface, only for a rush of water to engulf my mouth. It was then that the disconcerting prospect of drowning entered my mind. I eventually emerged coughing and spluttering madly, with only seconds to prepare myself for the fast approaching next wave. Feeling increasingly vulnerable, I dove down as far as I could and was pushed further away from where I’d started, looking around in a daze when I broke the surface.

It was now that my boyfriend called back to me from about 30 metres in front, as if having just remembered I was also in the water. (He would later insist that he’d begun to feel very worried about me at this point.) Unable to understand him, I could only raise my hand with a pathetic wave.

A few deep tumbles later and I was beginning to become exhausted in my quest to conquer the ferocious current. The challenge was no longer fun and my pride wasn’t strong enough to to feel like I was wimping out by turning back. Seeing another enormous wave loom up in the distance, I muttered: “Screw this” and turned to head back to shore. But just as I hoisted myself onto the board, I found myself suddenly surging forward, and I was then zooming back to shore, clinging for life to the board as it dashed along the surface like a speedboat.

Upon sliding onto the sand I glanced around in pleasant surprise, partly exhilarated by my thrilling ride, partly bewildered by what had just happened, and partly stunned I was still in one piece. I had managed to catch a wave at the perfect time…without even meaning to. There was nobody else on the beach but I still felt a need to act nonchalant as I left the water feeling sheepish about my undeserved success. I ran back to my boyfriend’s dad with a coolly unconcerned smile that completely disguised the fact that I’d been pooping my pants the entire time in the water. “Awesome wave!” he remarked with a grin. “Oh yeah, thanks! I was lucky,” I replied casually, deciding not to completely admit it hadn’t been at all planned.

In the car on the way home we reflected on the strength of the current, the boys excitedly recalling their victorious battles against huge waves. I remained quiet during their chatter, too busy still wondering how I was in one piece. “Well I think Shannon caught the best wave,” my boyfriend’s dad said pointedly after they’d been going on a little too long. The boys went quiet. I smiled.

Body boarding the waves during a normal current

It’s not only the waves that can be dangerous in Hawaii. Read about one of its daring hikes in Likes vs Lives: Hiking in “Heavenly” Hawaii

Have you ever been to Hawaii? Perhaps you had the same experience in its waters as me!

7 thoughts on “Conquering the Current in Kauai”